The Day I Ran into Taylor Swift at Target

I'm not even kidding. I honestly had a whole other post planned for today and then yesterday I went to Target and met Taylor Swift so I thought I would blog about that today instead!

Yesterday was your typical Monday, I got up and got ready and was planning to visit with Mel and Myles because they are moving today and I'm not sure when I will see them again. We were texting back and forth getting ready and I mentioned that I needed to run to Target if she was up for a walk! Because she had to pick up some larger items she said she would drive us down. I met them in the play room and we caught up a little before getting in the car and heading to Target, which is literally 5 minutes away if that.

We got into Target and were wondering around, I swear the store was basically empty! At one point I heard a bunch of clapping but didn't even give it a second thought, I wish I could tell you I knew her new CD was releasing today but I didn't have a clue. Even if I did I would have never thought she would have been in Jersey City at Target on a Monday morning for it!

Mel, Myles and I toured around the store, back and forth all over looking for different things. As we were walking to the toy section I noticed a large group of people coming from the CD section, I swear I didn't even see her in the crowd. Then Mel waved at someone and said "Hi, How are you?" and kept walking, I looked at her and and was like.. who are you talking to? and just like it was her best friend she said "Taylor Swift, that was her" Ummm what? I spun around and she wasn't lying.. it was Taylor Swift!! I could have died. I didn't know what to laugh at first, that Taylor Swift was in Target with us or that Mel acted like they were long lost friends! HA!

Let me just say I haven't been the biggest fan of a lot of her stuff, although I have been digging Shake it Off! I didn't know what to expect meeting her but let me tell you she seriously is the nicest person ever. She took time with everyone who asked for a picture with her. When I went up to her she asked what happened to my arm and said it sounded painful and she was really sorry and hoped I felt better soon. She was incredibly nice, down to earth and taller than I could have imagined! 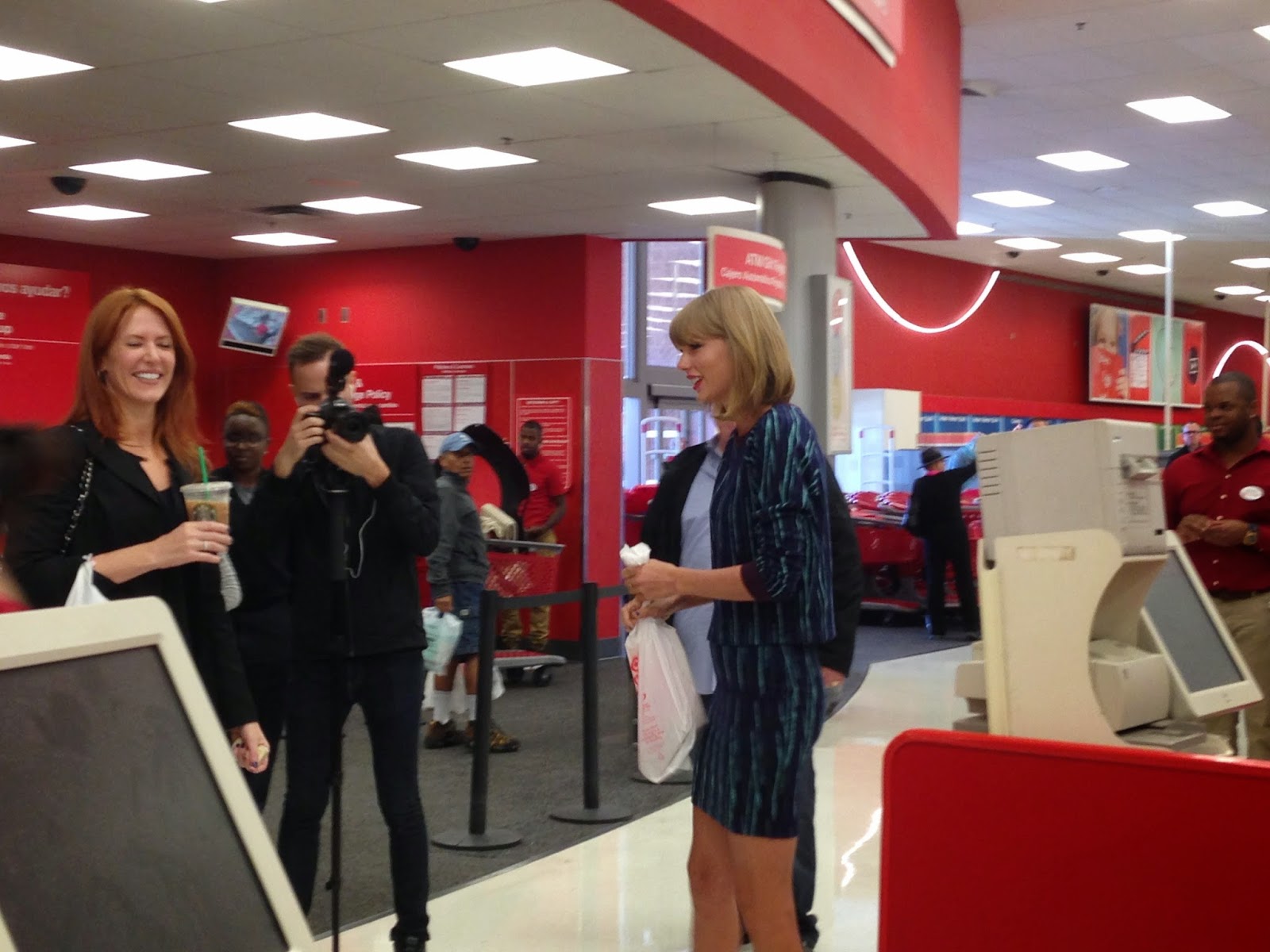 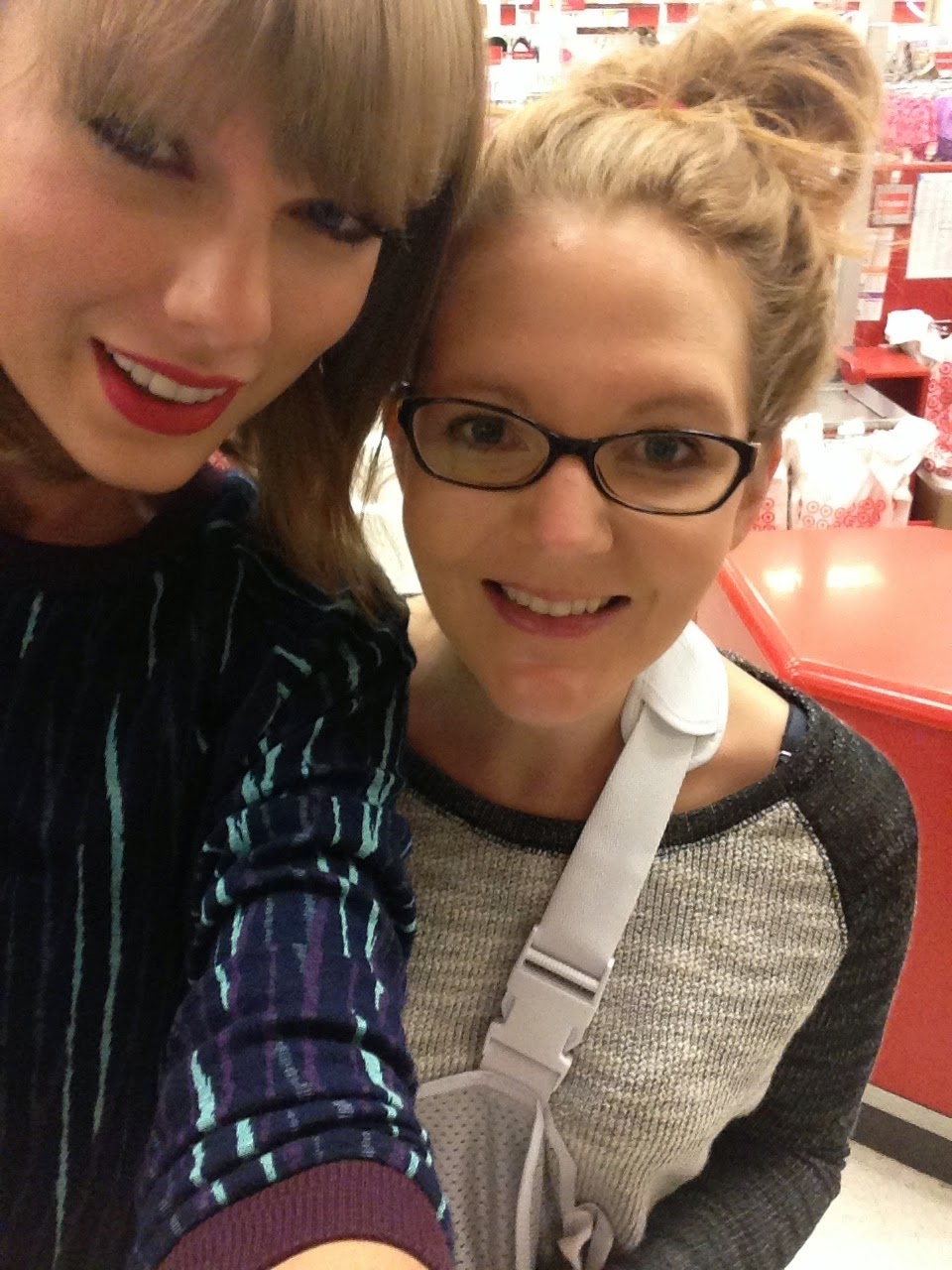 She had incredibly long arms, which she was laughing about when she was the one who took all the pictures! I thought that was pretty nice of her, everyone wanted a picture and she took them more than willingly! 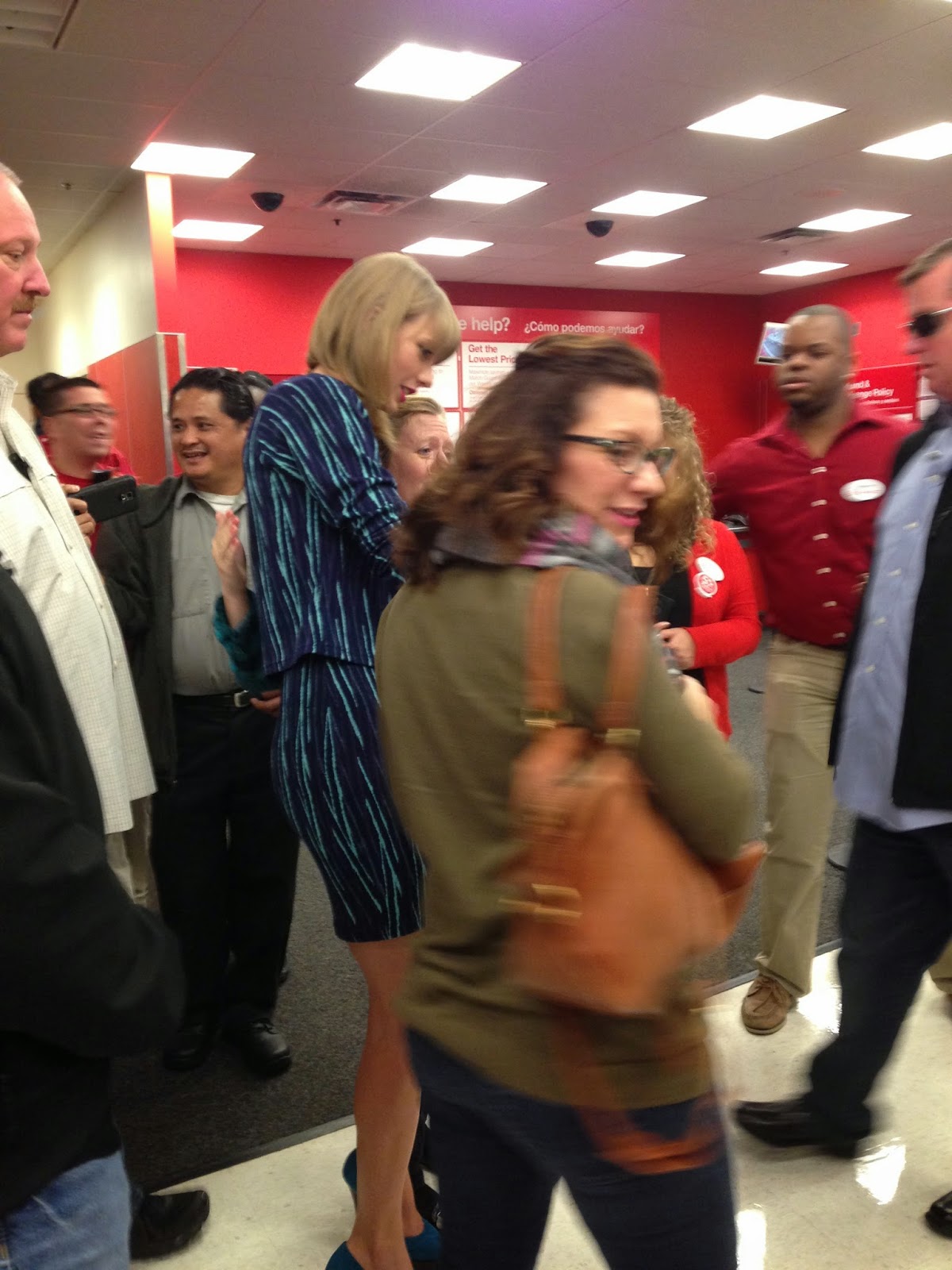 Mel going up to get a picture! Sorry some of them aren't fantastic quality, it was a little hectic! 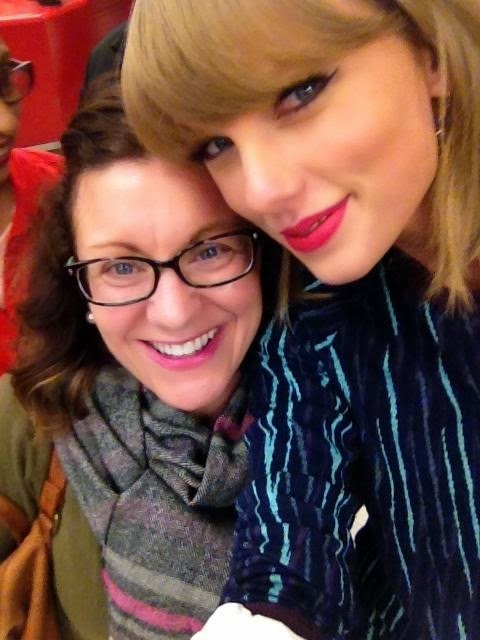 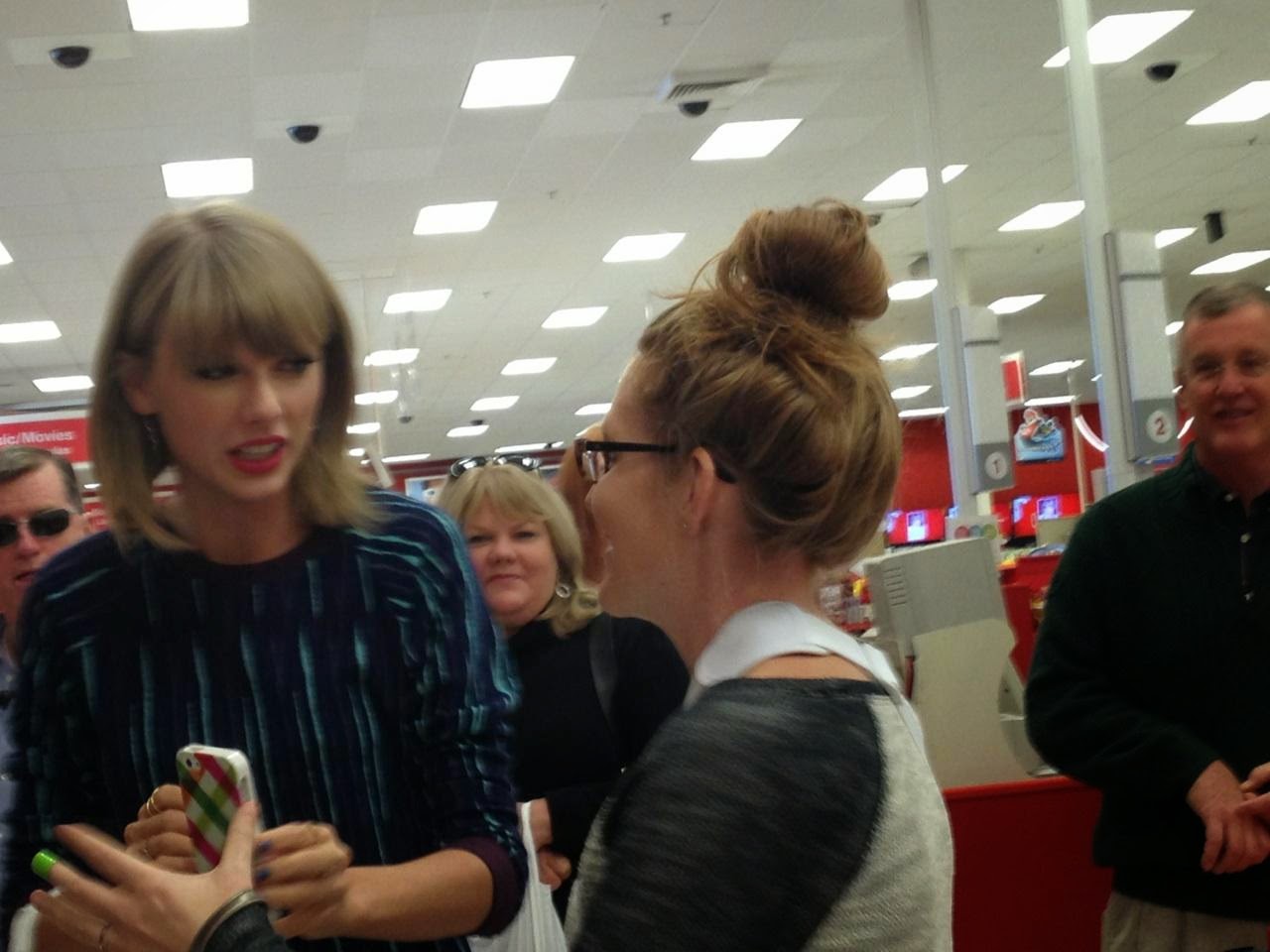 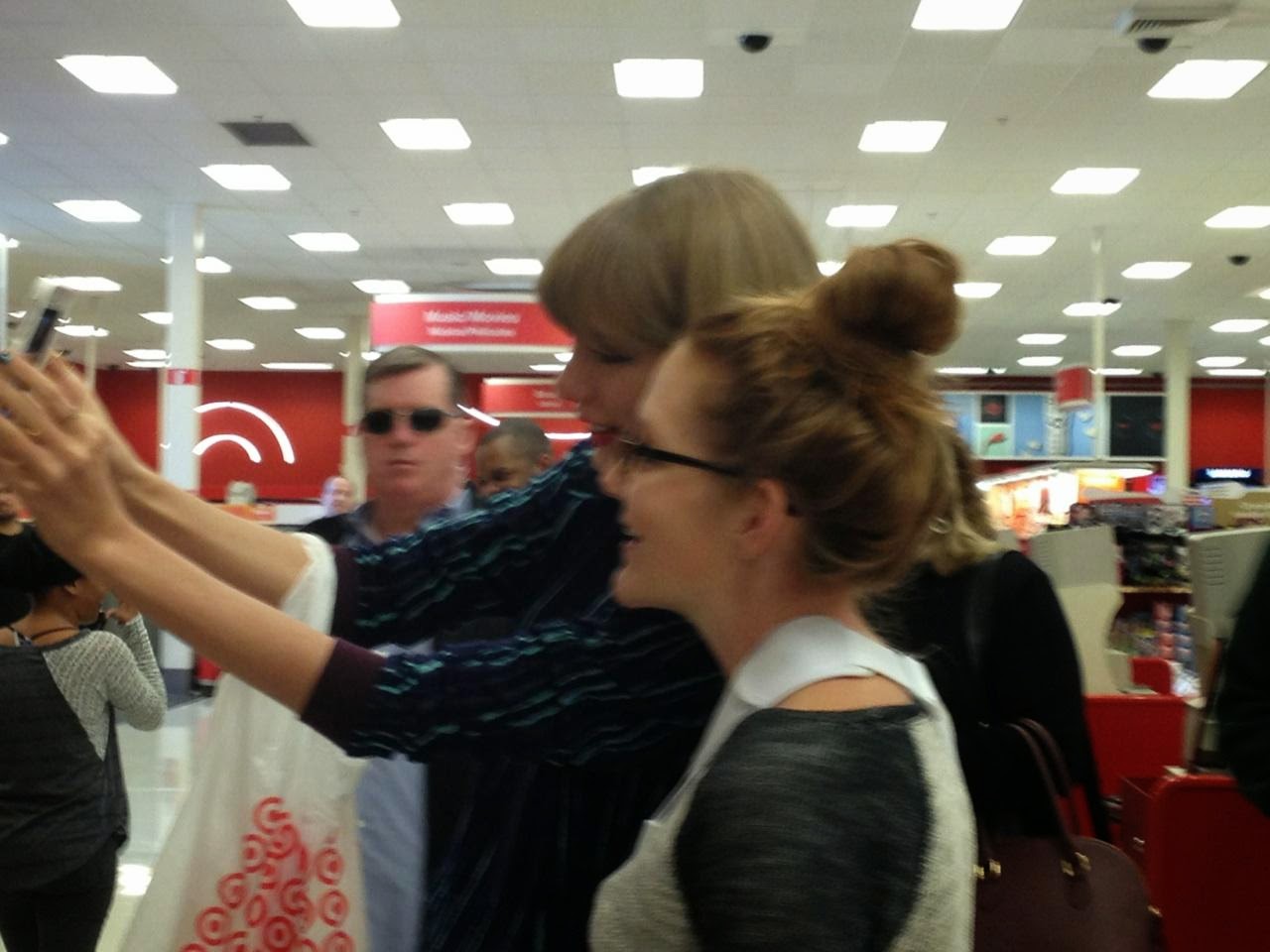 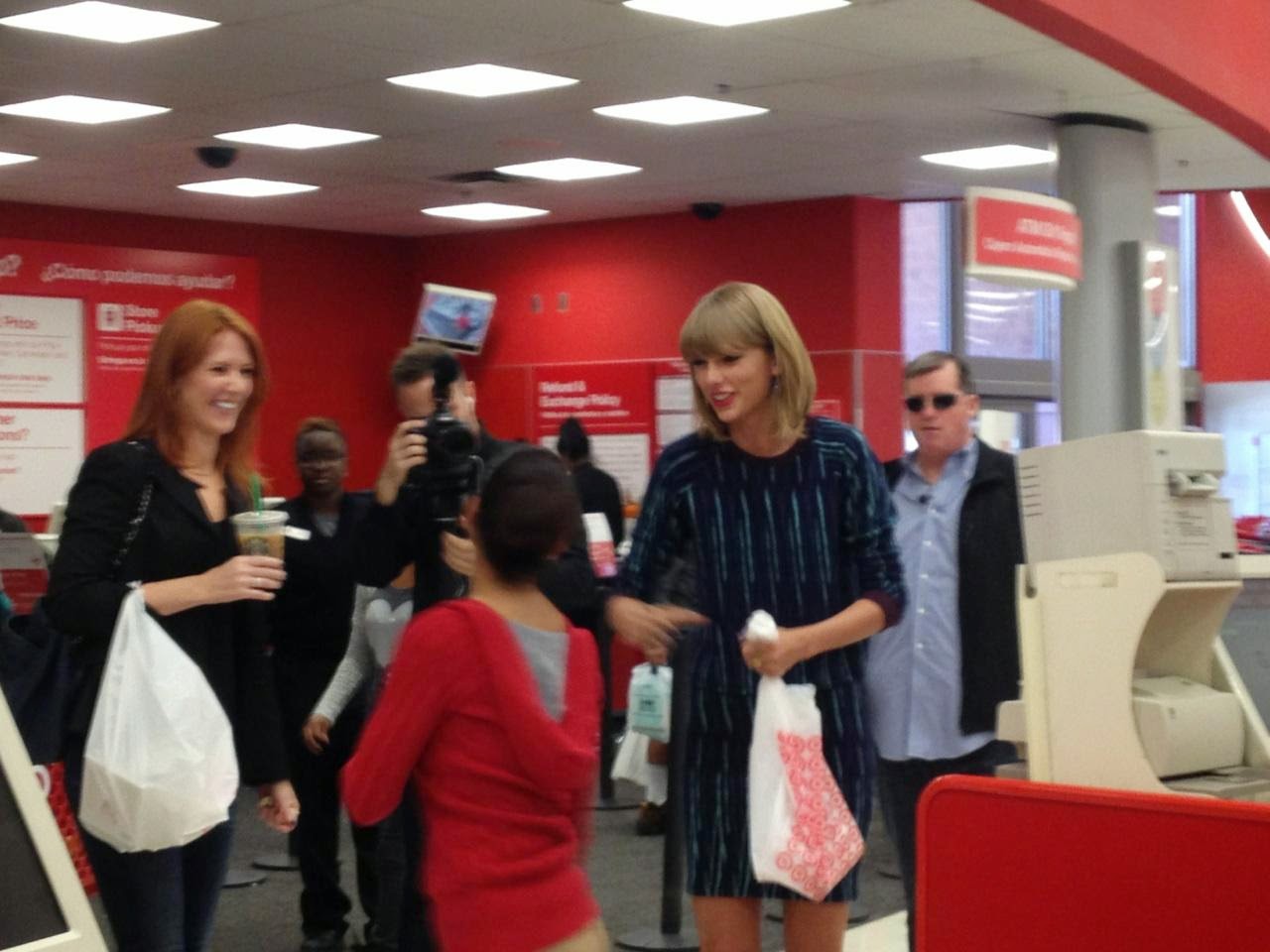 She was seriously so gracious! She took pictures with everyone and chatted away like she was just there shopping like anyone else. Although she obviously gets praise so often she seemed so humble and grateful. I have heard that she is super down to earth but it was still amazing to see!

So after all that excitement I sent my Mom and Jason pictures and went on to get what I needed. Mel and I laughed about it for the rest of our time there, I mean honestly what are the odds of running errands at Target and meeting Taylor Swift?

You know how much I love Target, but now I feel like after today it will never be as good! I really wish I would have seen her there earlier and got her to sign a CD or something.. but hey, I'm not complaining!

Anyways, I met Taylor Swift and it was pretty cool! I like her, we could totally hang out!