As you all know we are in full swing fall mode and what does that mean? Pumpkin everything! As I have mentioned before I don't actually care for pumpkin anything but Jason does so I am always looking for ways to get as much pumpkin stuff into his life/belly during this time because it makes him happy which in turn makes me happy and this time of year definitely doesn't last very long!

I have been told that the States has way more pumpkin stuff than anywhere else, and I will admit there is no shortage! Pumpkin spice oreos and M&Ms are two general staples in this house during this time of year, not to mention the mandatory pumpkin spice lattes from Starbucks.. Jason is now forced to wear dark clothing when we go to Starbucks because, well.. like me, he spills!

Anyways a couple of weeks ago at Target I was wandering around the Halloween treat section and I came across Pumpkin Spice Marshmallows! 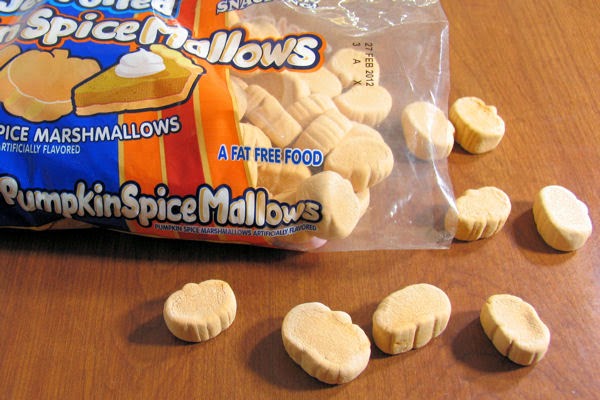 I don't like marshmallows but I do like Rice Krispies, so then and there I thought it might be a good idea to make my own rice krispies using the pumpkin spice marshmallows. Genius right! Don't get me wrong, I am not taking credit for this.. although I have not heard of anyone doing this I am sure people have!

Anyways yesterday one of the guys Jason works with went to the Patriots game in Boston and he bought Jason a bumper sticker for the truck which I thought was incredibly nice, so I decided to make him some of these rice krispies as a thank you and I'm sure everyone else will enjoy them too!

So Monday morning I got up and Mel and I headed to Target (where we met Taylor Swift) to get the stuff for her new place and my rice krispies!! I knew I would have to make two batches so I got two of everything. 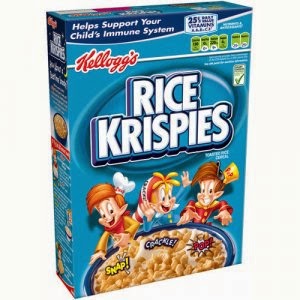 I came home and got started, let me tell you I have been making rice krispies for years but I forgot what a messy job it is especially when you are down an arm.. your good arm! None the less I am impressed with the final result!

I went to the box for directions because they have always had them on there, apparently they no longer do.. so I went to the website and here is what I found! 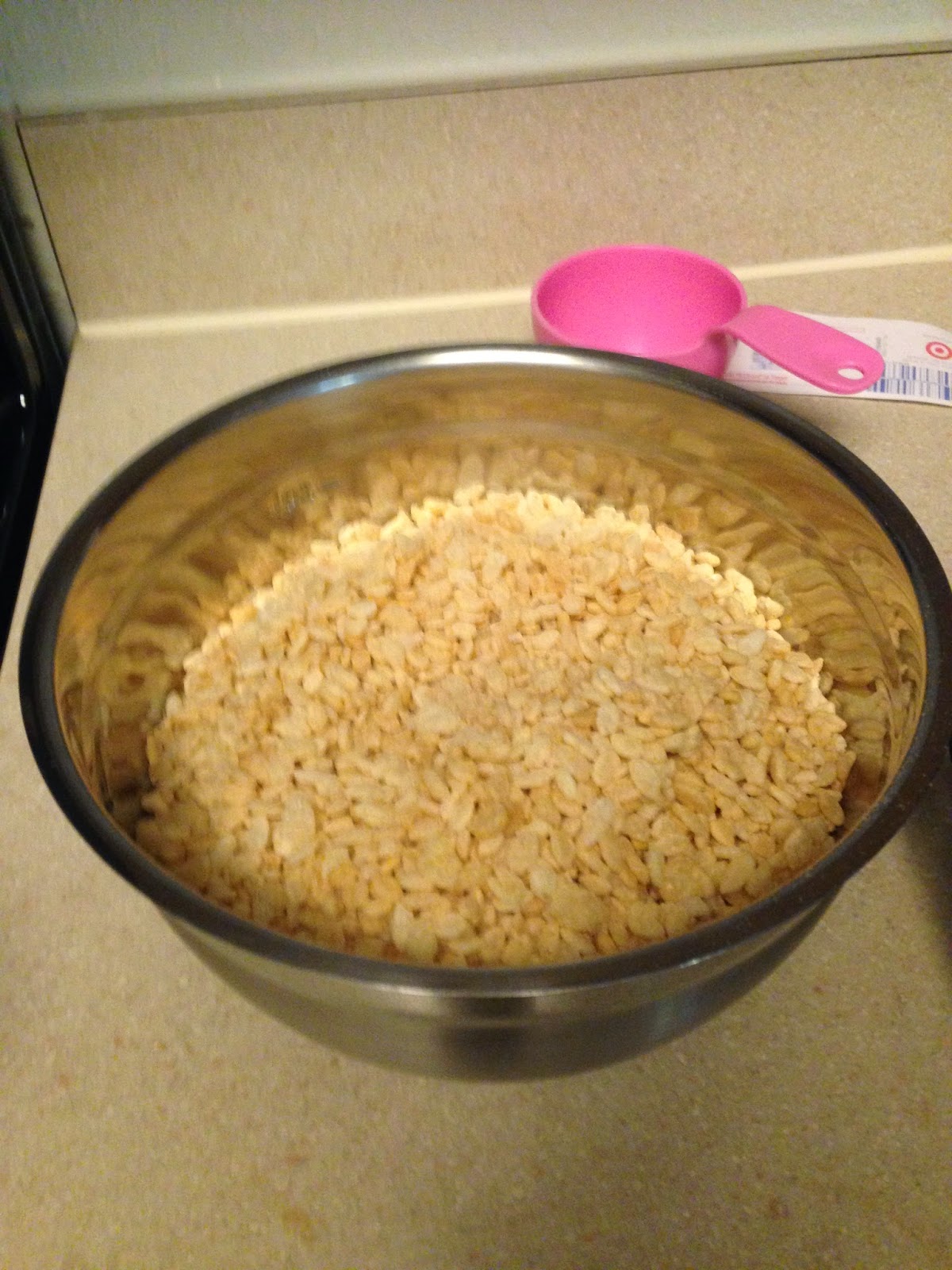 (Sorry, bad picture)
I measured out my 6 cups of Rice Krispies before I started because once the marshmallows have melted you don't want to waste time measuring when you need it for mixing. 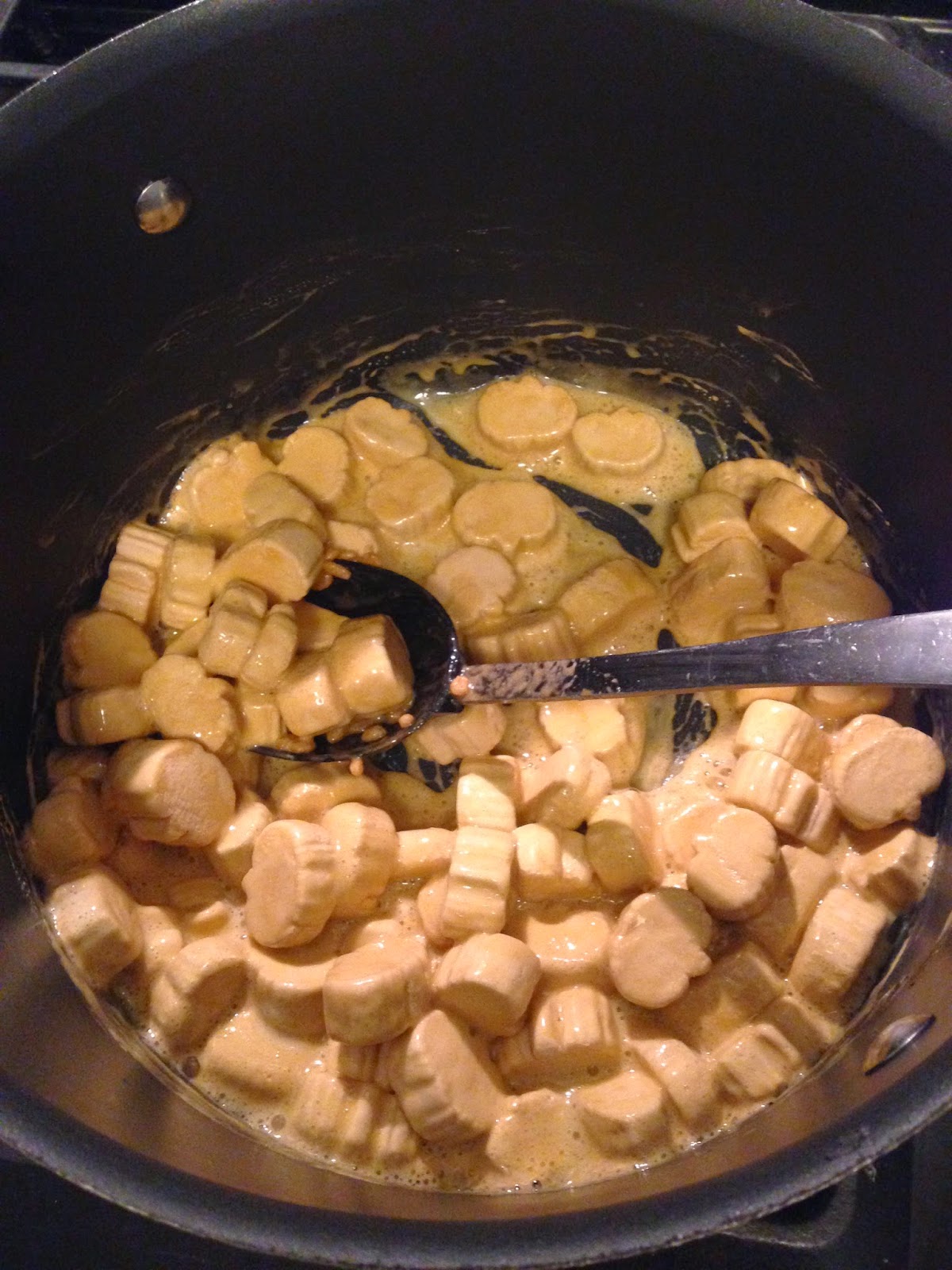 I melted 3 Tablespoons of butter in a large pot and then 1 package of Pumpkin Spice Jet Puffed Marshmallows.  (There are a few rice krispies on the spoon because this was my second batch!) 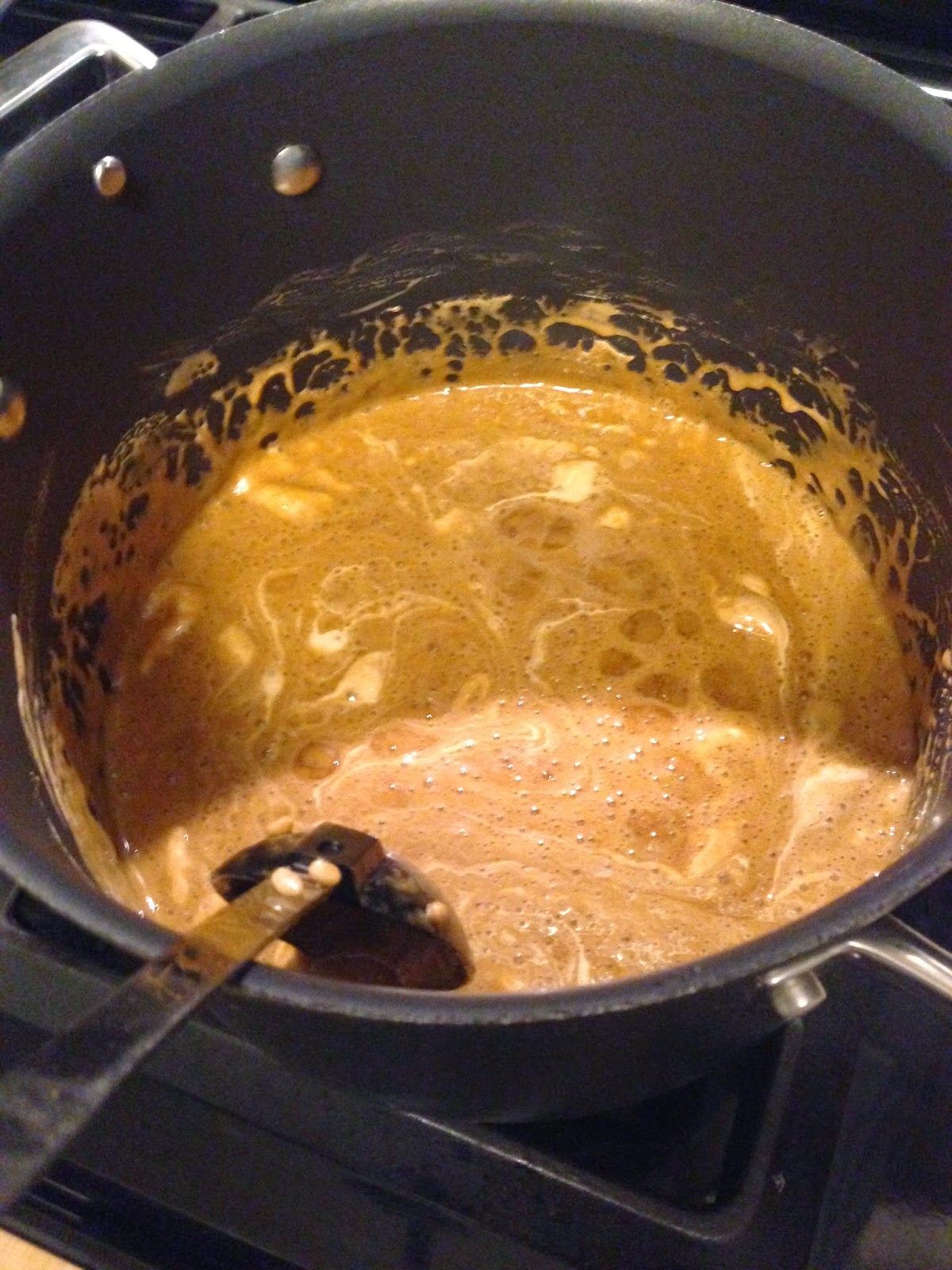 You want to stir the marshmallows continuously as they melt, keep at a low heat so you don't burn them. Once they have melted entirely you will add your 6 cups of Rice Krispies. 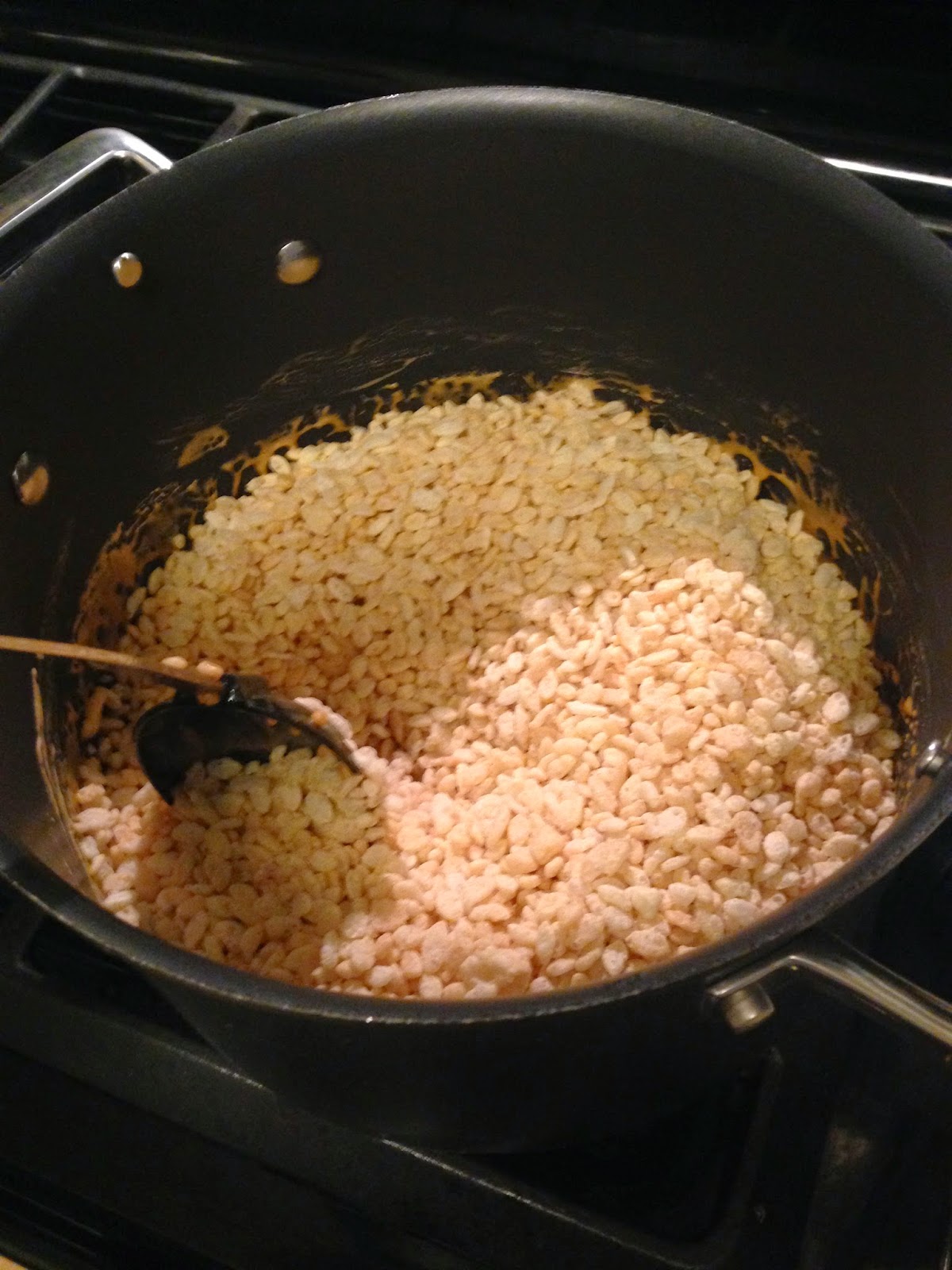 You want to mix them pretty quickly and thoroughly! 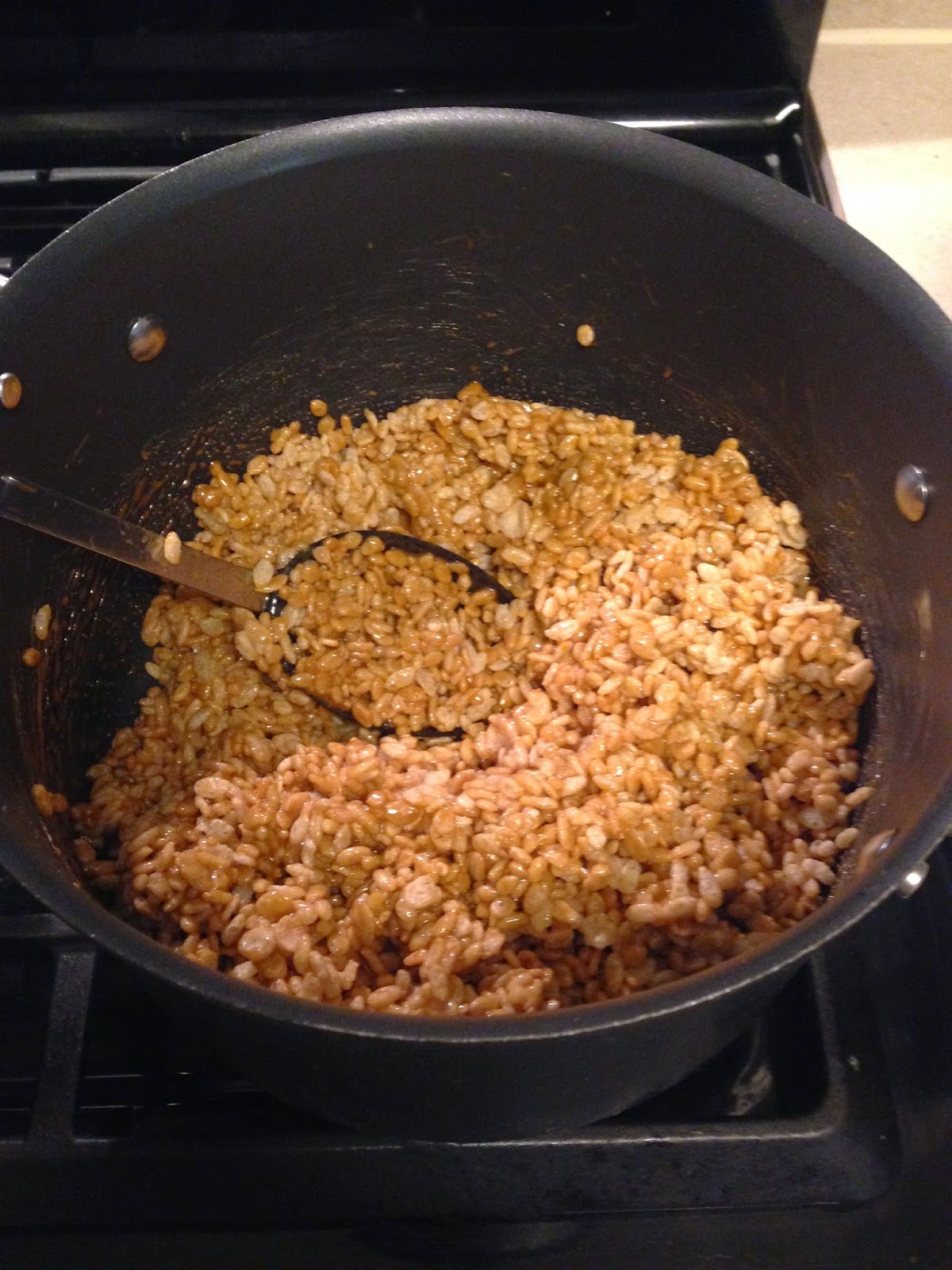 Once you have mixed everyone thoroughly you can put them in a regular pan, make muffin ones, or mini muffins. My first batch I was a little ambitious with the mini muffin idea, they were way too sticky and it was hard to get them the shape I wanted. I will recommend going over whatever pan you choose with a nonstick spray or a little bit of butter so once they set and you go to cut them and get them out easily. The marshmallow makes them quite sticky! 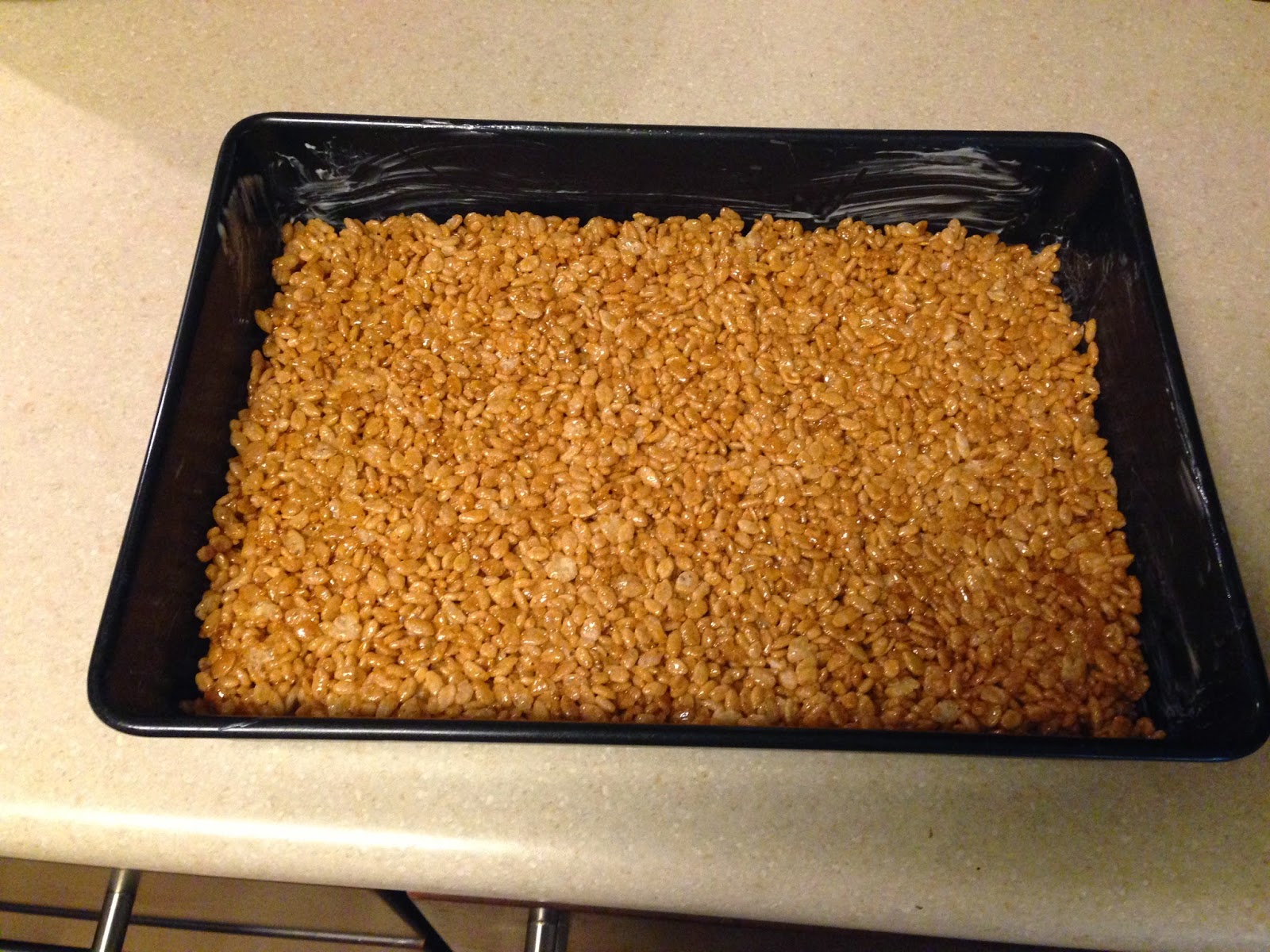 My second batch I did bars like I should have in the first place, It was easy, I spooned the mixture out of the pot and into the pan. I used a spatula to press it all down evenly. I let them set for a good 20 minutes on the counter and then I cut them into squares and put them in a Rubbermaid container to keep them fresh and for Jason to take them to work tomorrow! I have no doubt they will all be gone, but that's the point!

So there you have it, honestly I don't really like pumpkin anything but they turned out really good! If you are looking for a quick and easy snack, even something to do with your kids this is the recipe for you! The actual process of making these takes about 10 minutes, let them set for about 20 and you are good to go!

Email ThisBlogThis!Share to TwitterShare to FacebookShare to Pinterest
Labels: Recipes