The Trouble With Blogging... and Winter Storm Jonas!

Well its been almost a month since I've been here and as that was not the plan that's how it played out. Honestly I don't know why, but I pretty much told myself that I would just blog when I felt like it, and I guess I didn't feel like it. I have a bunch of stuff I want to write about, a bunch of products that I have tried that I want to tell y'all about and I don't know why I just haven't been able to get here and get motivated to write.

I have gotten back into reading which has been great, I suppose I could do some book reviews as well. As you may know I got a new Nook for my birthday and I was struggling to get books on there so in the meantime I just read books that I had laying around. Finally last week I sat down and watched a bunch of youtube videos at Jason's recommendation and they didn't help at all. So I started reading forums and people were having the same issues I was, so I did a bunch of things they recommended and TA DA, it worked like a charm! My Nook hasn't left my hands since!

I fixed my Nook just in time for Winter Storm Jonas to hit us! We knew it was coming but truth be told I really didn't expect it to be as bad as it was. Wednesday night we got about an inch and I swear the city stopped, they didn't seem prepared for it at all, we had been out at Target and on the drive home the roads were terrible and there were no plows or salt trucks in sight. When it started to snow on Friday at literally exactly the time they said it would, I wondered were we really going to get all they were calling for and how they would handle it here.

Friday morning Tanya and I went for a walk and then came home to hunker down for all they had called for. It started to snow around 1pm just as they had said and it did not stop until sometime very early Sunday morning!

Friday the snow was steady and heavy but the wind wasn't nearly as horrific as we saw on Saturday. We had the weather channel on almost all day Saturday and they basically begged people to say in and off the roads, which you wouldn't have thought that would have been an issue on account you could barely see a thing outside with the blizzard conditions but people were actually out. They started fining people and arresting them in New York city for driving. They were concerned with people getting stuck everywhere and basically inhibiting clean up and emergency vehicles.. Honestly I just couldn't understand what would be so important to venture out in that.

We were not only worried about possibly losing power here but also at our house! Raleigh was also effected by the storm and as usual they got more ice than snow! We made sure to turn the heat up a lot just in case we lost power and fortunately things at the house were fine.

However on Saturday morning we woke up to no heat in our apartment. I'm not exactly sure why it wasn't working but we ended up calling maintenance and they had apparently contracted our maintenance out to people who had never been here before and basically said they would do their best to find someone with a four wheel drive vehicle to get out to us! I couldn't believe it! Thankfully the heat just started working again or I have a feeling we would have been without for awhile.

I'll share some pictures of Friday and Saturday with you before I move on to Sunday and what we got up to! 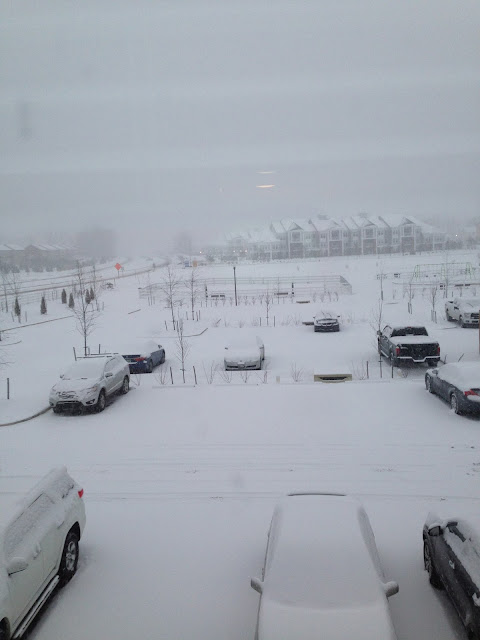 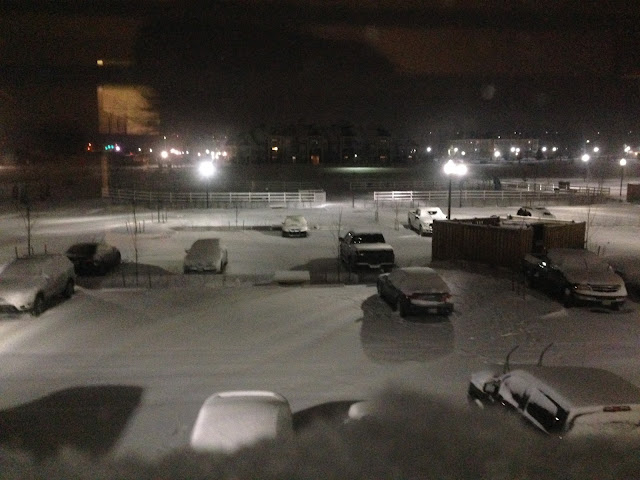 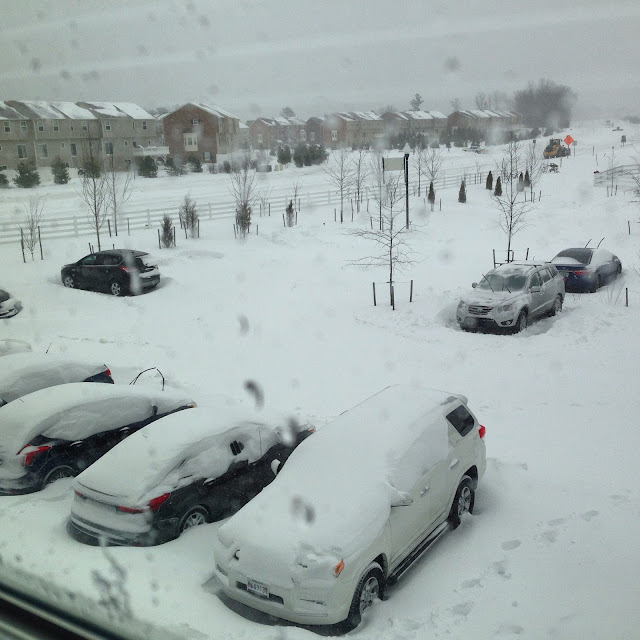 Saturday morning! Keep in mind the wind was CRAZY, there were snow drifts EVERYWHERE! 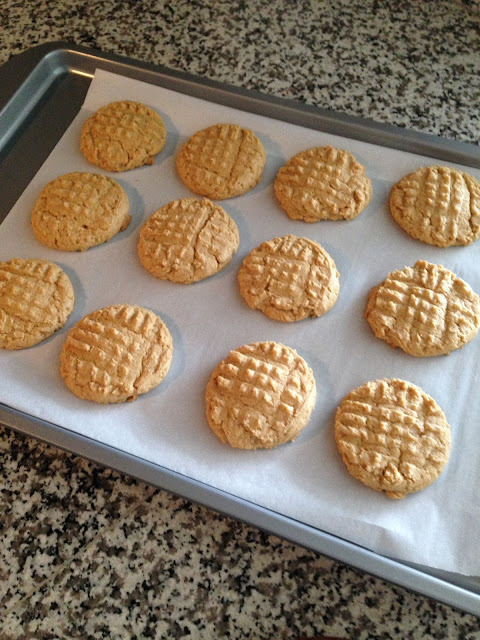 I was pretty bored, so I baked some peanut butter cookies.. then I ate a bunch. Note to self, don't bake when you cant get rid of the cookies ASAP. 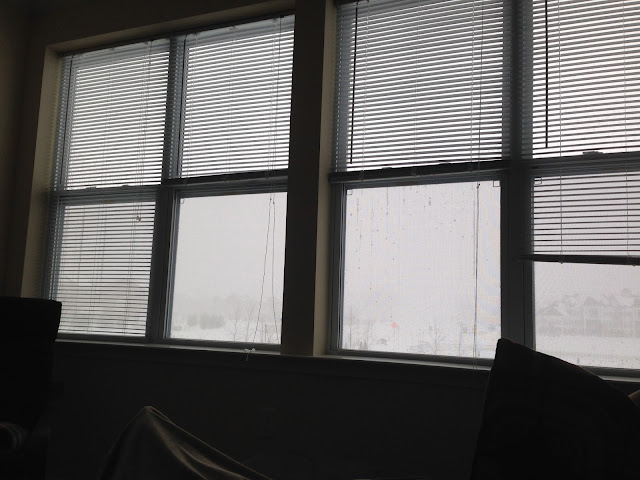 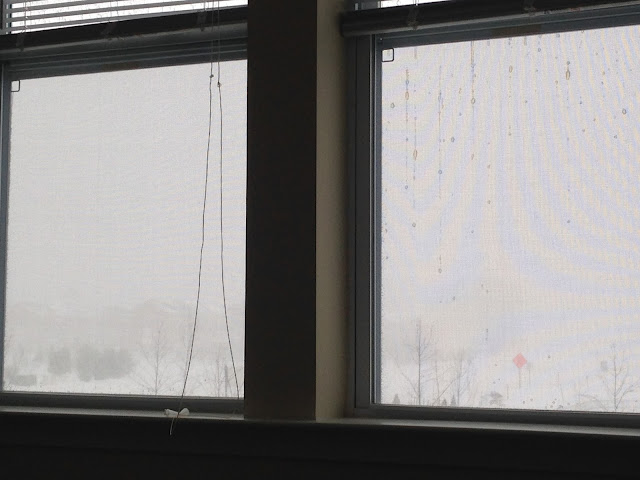 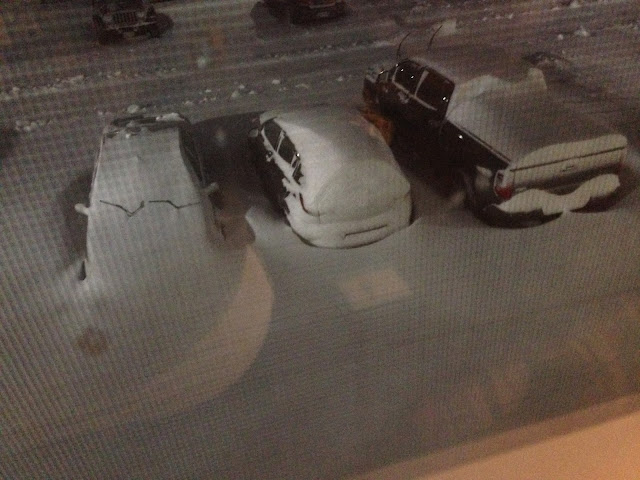 Saturday night. Don't think these people are going anywhere. In fact a bunch of them are still out there looking not much different. 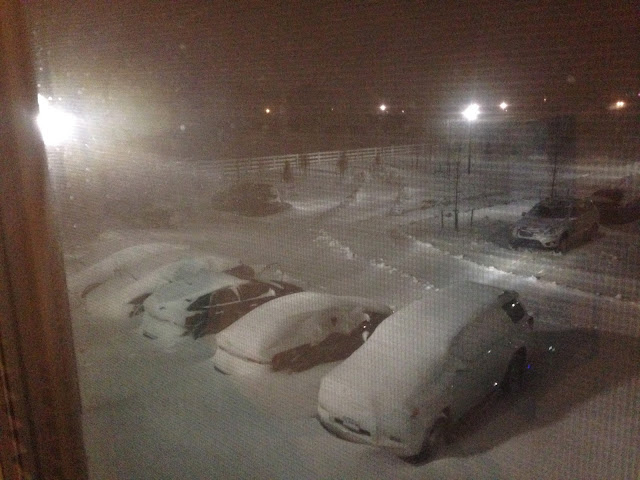 Saturday night. What a mess.

I believe it was suppose to snow until Sunday morning some time, we went to bed late Saturday night and it was still snowing, I was up at 7am on Sunday and it has stopped. It was such a huge mess. Jason had borrowed a shovel from Dave thankfully and went out a few times on Saturday to shovel out the truck so it wouldn't be a huge job Sunday.. it was really good thinking on his part.

Sunday morning Jason helped Josh move some stuff from their storage unit to their apartment and when he got back he saw an older gentlemen who lives here trying to dig out his cars, honestly he was far too old to be doing it and god love Jason and his big heart he spent a really long time out there making sure his cars were dug out. 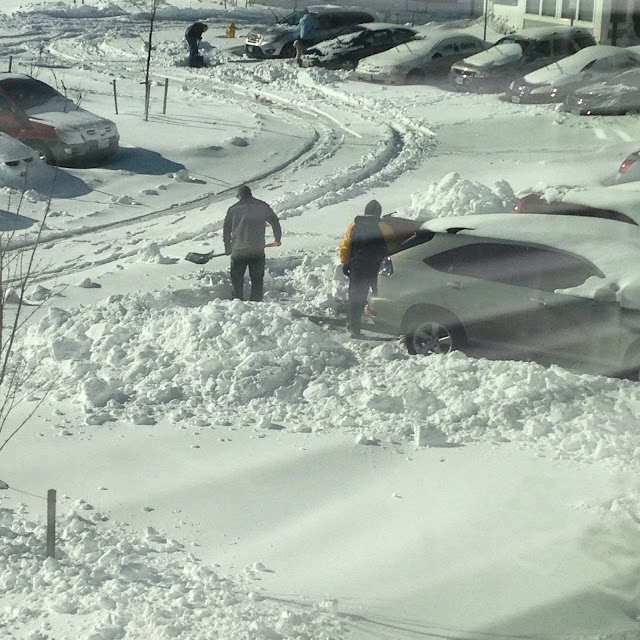 I went out to see if Jason needed some gloves or anything and that gentlemen told me he and his wife were moving to the Philippines where his wife is from, they were over winter! I hear ya my friend, I hear ya!

Having said that it was an absolutely beautiful day and the snow looked so pretty! I was up and ready anyways so Jason and I decided to head over to Target because we had something to return, get Starbucks and see if we could make it over to Dave and Lindsey's to play with the girls in the snow! Believe it or not the people who were suppose to plow the Target parking lot didn't show so that was a bit of a mess but we managed to get everything done we needed to and headed to Dave and Lindsey's.

Lindsey had told me that their roads hadn't been plowed but on our way over every other one was until it was time to turn onto their street. I really thought Jason would just say forget it when he saw the 20 inches on untouched snow covering the road to get to their house. The truck is brand new therefore it just has all season tires on it and its the snow ultra lightweight Ford so there wasn't much for traction either. Well I assumed wrong, instead of just driving back home Jason laid on the gas and fish tailed down the road to Dave and Lindsey's house! I think the neighbors thought he was totally whacked! Then when we arrived he slid the truck into the cul de sac and was flying around! Literally snow was flying absolutely everywhere, the truck was spinning around and while the neighbors were all standing at the end of their driveways staring, Jason was glowing.. loving every single second of it! There was SO MUCH SNOW!

Finally he was stuck and he and Dave had to shovel out the truck, while they got to work on that I went in to see if the girls were ready to come out and play. Lily was already half dressed and ready to go but Ava took a little more coercing! Lindsey asked her did she want to get dressed and go out and play.. she said "NO!" haha I couldn't blame her, she doesn't like to be cold. Lindsey then told her that Jason came to play with her, was she sure she didn't want to go out.. she replied.. "ummm.. NO!". Not long after though she saw Dave and Jason working on a snow fort outside and she got dressed! 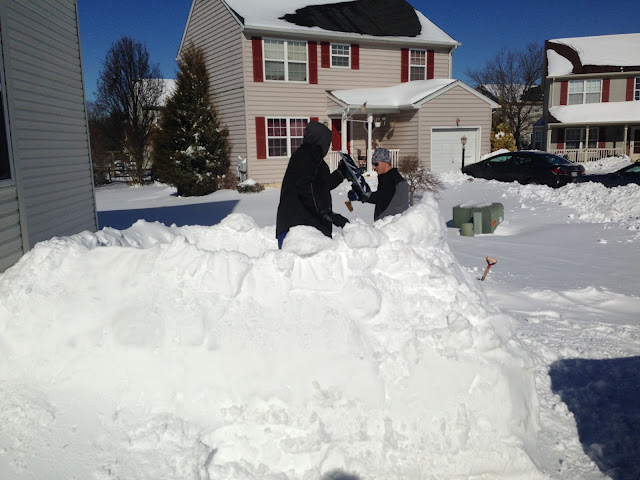 I don't know if this fort was for them or the girls. 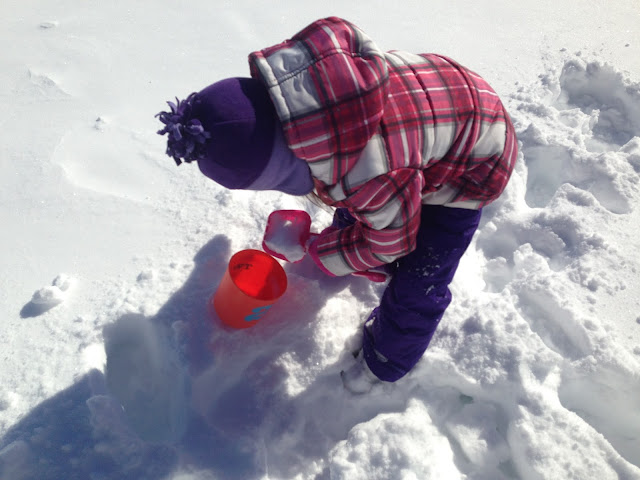 Lily and I were trying to make a castle out of snow with her bucket but sadly it wasn't really good packing snow. 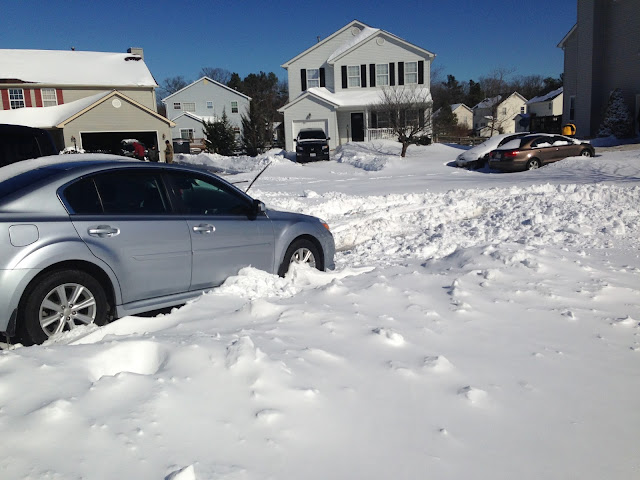 That mess in the middle of the cul de sac was courtesy of Jason. 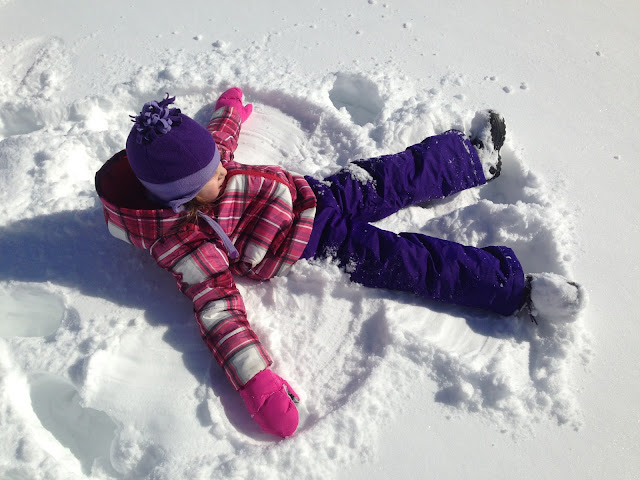 I'm telling you if I had snow pants I would have been right down there with Lily making snow angels! 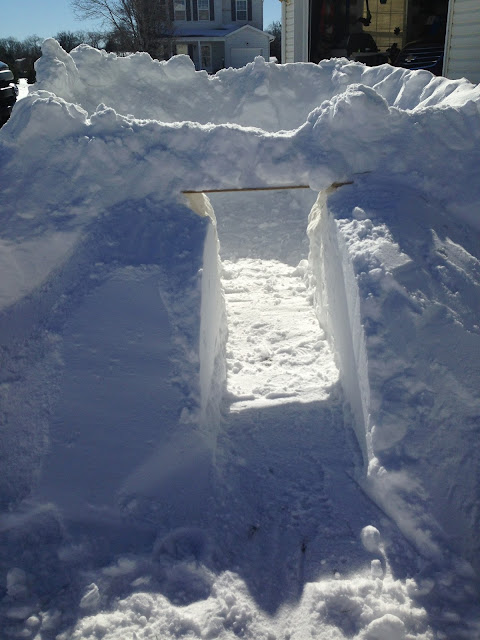 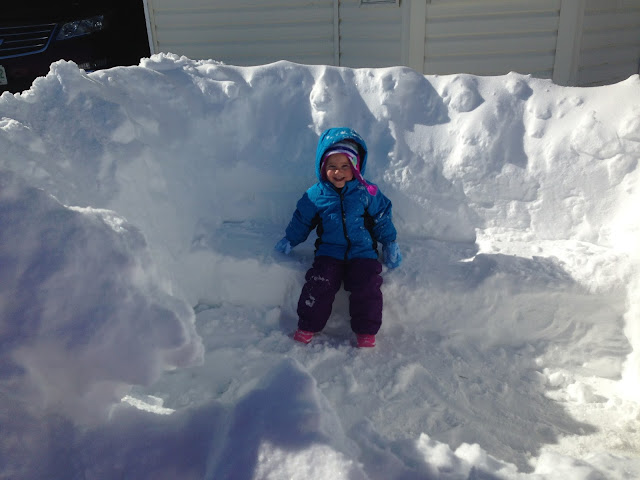 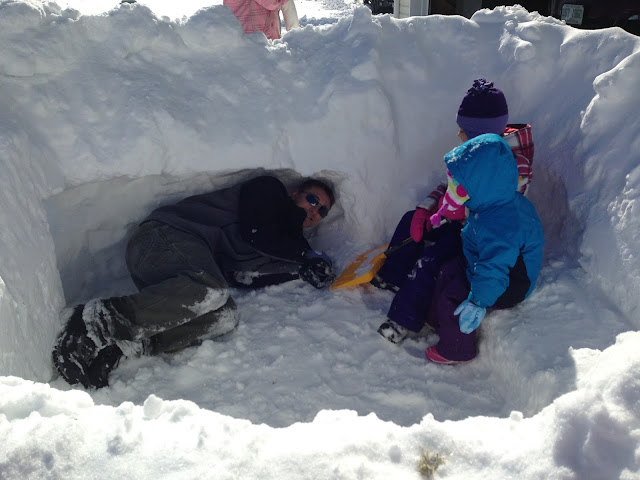 Jason enjoying the snow fort just as much as the girls! 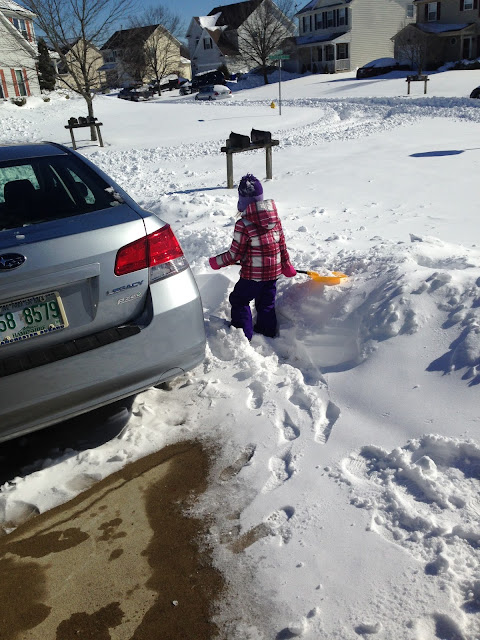 Lily was a big help in the shoveling department. 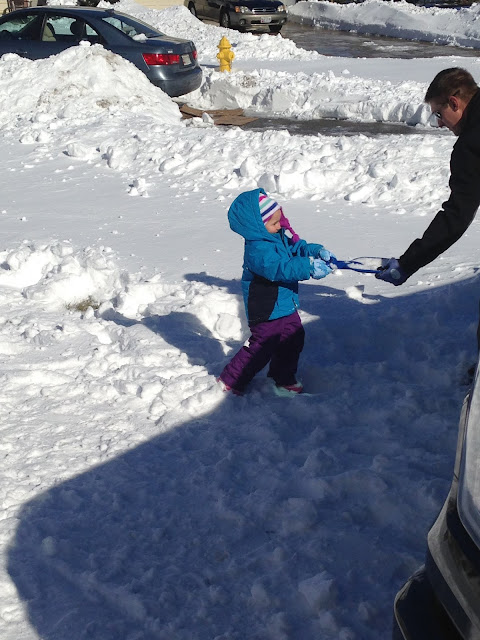 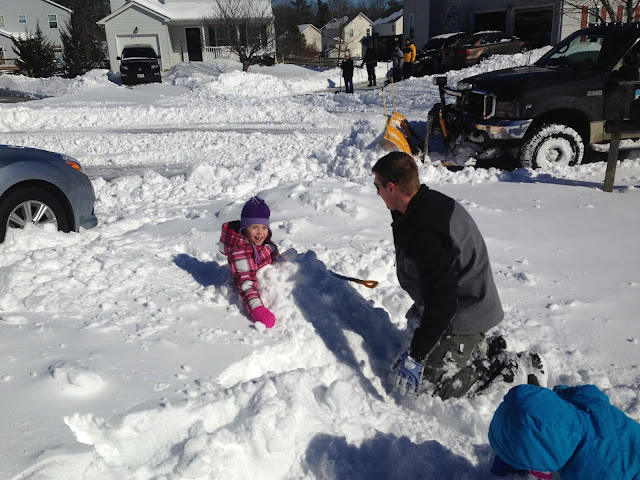 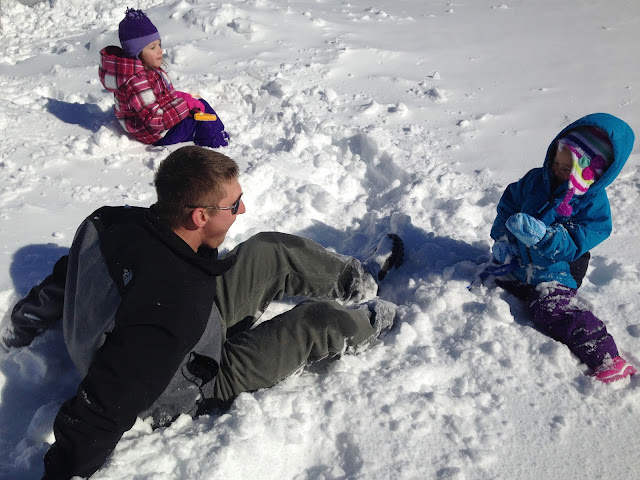 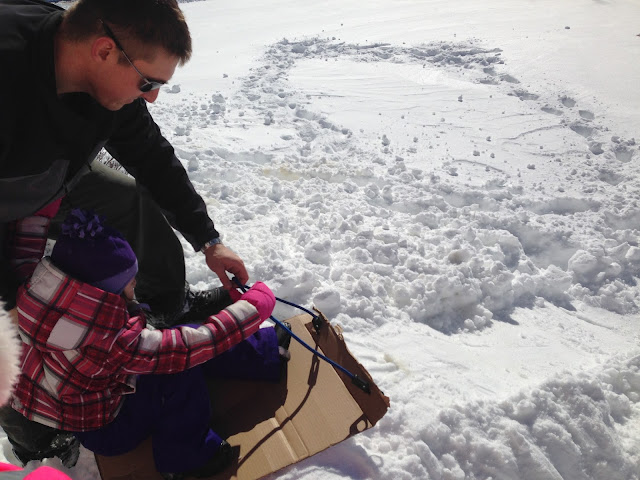 Sadly there were no sleds around to buy, they all sold out much earlier in the week! So Jason fashioned this sled for Lily and her friend Elizabeth out of cardboard and a bungy cord! It worked for awhile!! 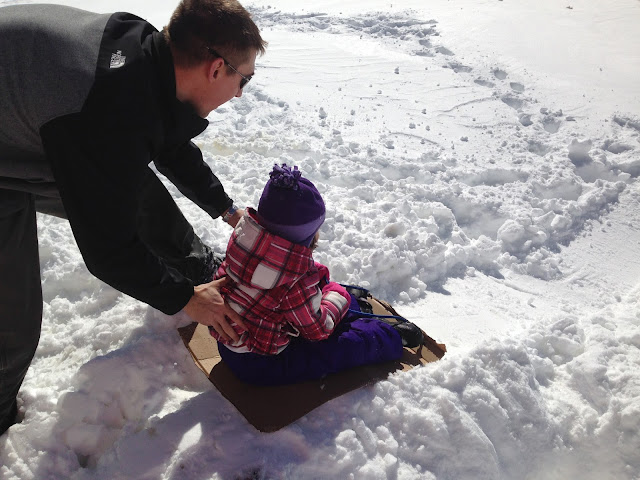 We had a lot of fun playing in the snow, but sadly needed to come home to get dinner on and get ready for football. It was a good thing that we left early because as we left Jason realized we were passing the apartment of another guy he works with who is a little older and we wanted to make sure he didn't need any help getting out.. he was good but when we got back to our apartment there was a few other coworkers of Jason that needed help and then just other neighbors!

They did some clearing of our parking lot last night but I wont lie it was pretty pathetic! They didn't touch anything until after it had stopped snowing and I really think that was a mistake. This morning the parking lot and sidewalks outside looked like a skating rink. I don't think they use salt here. People are still snowed in, I don't think a lot of people had shovels or expected this much. I believe more things have reopened today. 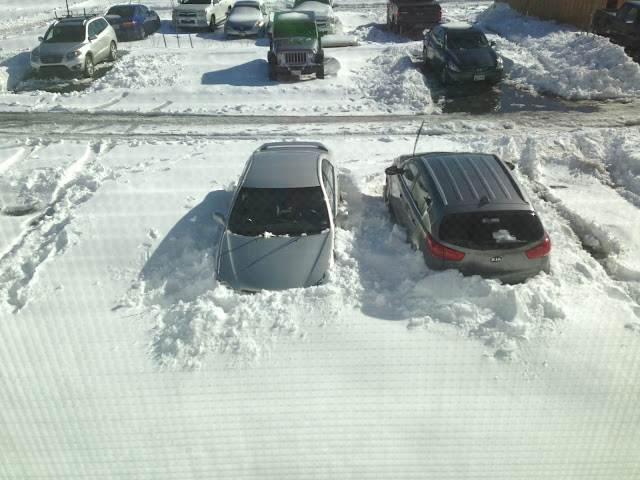 I have heard a nasty rumor that we may get another storm this weekend but I am really hoping that is not true! We are heading to Baltimore on Saturday for the Garth Brooks concert and I really don't want anything to get in the way of that!!

So there you have it, my account of winter storm Jonas. It definitely could have been a lot worse, if you have been watching the news at all you may have seen that coast of New Jersey had absolutely TERRIBLE flooding, I am keeping those people in my thoughts. At this point there are still people without power and dealing with way bigger issues than just shoveling out their car. It pays to be prepared in these cases as much as you absolutely can and listen to the weather station, take their advice and listen to their recommendations!!

I am planning to be back here again this week, I'm setting a goal for myself to blog more than once this week! Thank you all for stopping by, I hope the new year is treating you well!