Good Morning!! It's not like I get to say that very often as I don't often make it around here that early! This morning I unwillingly got up earlier then anyone should ever have to get up to take Jason to work so I can get some things done today. The truck is in desperate need of an oil change, I need to go to the bank (this whole going to the bank instead of doing things online like is completely called for in the times is irritating!), I'm going to venture over to Dolly Sue's (no I'm not kidding) and get my eye brows done, pick up some groceries and go to the post office!

I swear every time I have to get up early like this it's like my body says "screw you" because I can't sleep! I knew it was going to happen last night, I just knew it!! We watched football last night (GO EAGLES & TEXANS!!! - Steve I think we should reconsider teams with bird names!) and then switched over for awhile to watch Under the Dome.. Jason got totally into that show for some reason and next week is the last week for it! If you haven't heard of it, it is based on the Stephen King novel - Under the Dome. Its actually a pretty good show and I am all for Jason watching something other than The Simpsons at night! Anyways after Under the Dome was over Jason was half asleep so I continued to watch the Texan's come back over the Chargers and take the win! Then I turned the TV off and pinned for a dogs age, still unable to sleep! Eventually I just tossed and turned all night until I looked at the clock at 5:00am.. ugh.. that was the end of my tossing and turning.. I just laid there waiting for the alarm to go off.

I begged Jason not to go to work, not to make me get up but with less than 3 weeks left of work (we leave this flippin' place three weeks from yesterday!!) there was no talking him out of it. However while I was in the bathroom I heard him hacking and coughing, choking to the point that I came out to check on him.. he was standing at the fridge eyes watering and straight faced, he looked at me and said "I think I just swallowed a fly".. LOL - I almost died!!! Still its definitely worse taking him to work in the mornings now as its darker later and colder... much colder! I busted out my roots sweats (the bright spot in the whole miserable situation) and headed out the door! Thankfully the truck has heated seats! I suppose seeing the sunrise isn't terrible either, although honestly I would have traded it for some more sleep.. 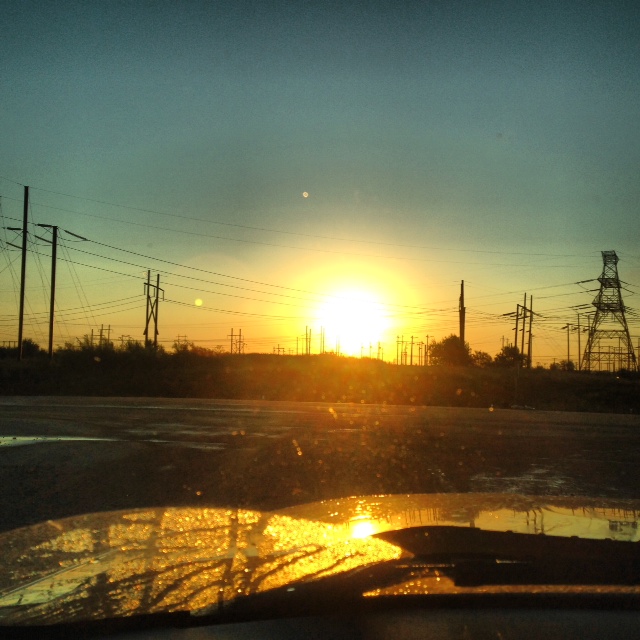 So I dropped off my love and headed back to the apartment... it was so bright out, all the sudden... good lord, give a girl a chance to adjust! I put on my sunglasses but since I got new lenses and they are darker it makes it so hard to see the kilometers on the speedometer which is obviously a problem, so most often I am probably speeding... whatever though the speed limit around here is 50kmph/35mph which is basically coasting, its bullshit! I mean everyone around here are construction guys in trucks!! Oddly enough everyone obeys the rules, they coast around and when stopped at a light and it turns green they wait for a damn invitation before moving their asses.. I hate that!

The brightest part of my morning, the Tim Hortons drive thru was empty! SCORE! I never go there, not even when I drop Jason off at work usually but the last couple of times I just felt like something different and this morning a bagel and coffee was screaming my name! Mostly the bagel.. I never have them but when I want one it has to be a Tim Hortons Sun dried tomato, Parmesan, asiago bagel toasted! 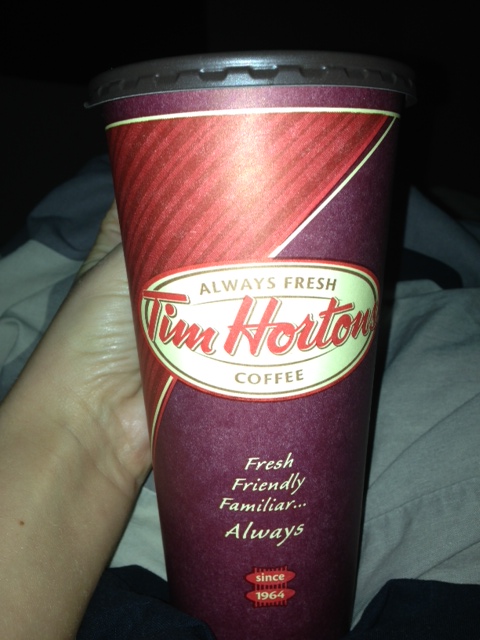 Yes I got back in bed! Not watching Good Morning America like I would like to but Eat, Shrink and Be Merry will do!

So I am off to get ready and head out to get my stuff done, I hate having a to-do list that hasn't been started/finished! I might stop back this afternoon if I get a chance. I have to pick up Jason from work tonight and then we are headed to the gym! Its suppose to be a beautiful day out so I am ready to get it started... again.

I hope you all have a wonderful day!