Before you all go and groan because I am reviewing yet another Danielle Steele book I think we all need to take a minute and acknowledge the talent of this women as these are all new releases and there is a lot, so go her! Besides I must say this is book is quite different than a lot of her other books, in a way it reminds me of Lone Eagle but not quite as good (that one is my absolute favorite of hers ever!).

So I really wanted to come by and share my thoughts on this book with you. I am really sorry if you are getting sick of the book reviews around here but I have been reading a TON lately and I always like to share. Winter is a time that I believe people tend to read more, you tend to cozy up more in the winter with a tea and a book and I love to know what other people are reading and what they think of it. As I mentioned before right now I am cleaning up my books and just reading what I have before I buy more, my list of books I want to read is super extensive.

If you aren't into the book reviews, I get it and won't be offended if you don't read them. Sometimes there just isn't much to report in our lives and instead of not writing anything at all I am trying to fill the void. We may eventually get out of this place and than I will have more exciting things to write about! This summer is shaping up to have some traveling and I am pretty excited about it.

Anyways lets move on to the book shall we? 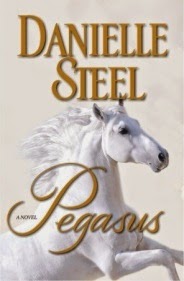 The following synopsis is taken directly from the good reads website and can be viewed HERE.

This is a story of courage, friendship, and fate as two families face the challenges of war... and the magnificent stallion that will link them forever.

Nicolas von Bingen and Alex von Hemmerle, titled members of the German aristocracy, have been best friends since childhood. Both widowers, they are raising their children — Nick’s two lively boys and Alex’s adored teenage daughter — in peace and luxury on the vast Bavarian estates that have belonged to their families for generations. While Nick indulges in more glamorous pursuits, Alex devotes himself to breeding the renowned white Lipizzaner horses that enthrall audiences throughout Europe with their ability to dance and spin on command, majestic creatures whose bloodlines are rare and priceless.

But it is Nicolas’s bloodline that changes everything, when his father receives a warning from a high-ranking contact inside the Wehrmacht. A secret from the past has left the family vulnerable to the rising tide of Nazism: Nick’s mother, whom he never knew, was of Jewish descent.

Suddenly Nicolas must flee Germany, wrenching his sons away from the only home they have known, sailing across the Atlantic for a new life in America. Their survival will depend on a precious gift from Alex, their only stake for the future: eight purebred horses, two of them stunning Lipizzaners. In Florida, where Nicolas joins the Ringling Brothers Circus, he becomes Nick Bing, with Alex’s prize white stallion — now named Pegasus — the centerpiece of the show.

Pegasus tells the story of a family reinventing itself in America, while the country they left behind is engulfed in flames and madness, and men like Alex von Hemmerle are forced to make unbearable choices. Alex’s daughter will find sanctuary in England. In America, Nick will find love, his sons will find a future, and their left-behind world will eventually find them. A novel of hope and sacrifice, of tragedy, challenge, and rebirth, It is a brilliant family chronicle that unfolds across half a century—a masterwork from one of our most beloved writers.

As you can see its your not typical Danielle Steele somewhat fluff read, there were tales of the war and honestly a lot of sadness. At first I wont lie it took me some time to actually get into the book which I cannot honestly say is a reflection of the book itself, at least I don't think. Once I got into it I really enjoyed the book and the change of pace from her usual writing.

There were definitely twists and turns that made you want to turn and page and find out what was going to happen next. It gave a lot of perspective to a different time in the world and what life would have been like living through such a terrible time.

I feel the book was extremely well written, I wouldn't expect anything less but I will say I didn't care for the ending. Maybe it was just me but I didn't love how the ending went from everyone just getting to wear they wanted to be in life to everyone dying.. for generations. I feel like although I know where the story was going it was .. so and had a baby then died, than their baby grew up and had a baby and then they died.. and so on.. then book over.

I would definitely recommend the book, I feel the ending lacked realism basically which turned me off just a little. Its not a book I would read again but I did enjoy it.

So those are just a few of my thoughts on my latest reads, definitely expect more.. one I have already finished another books since this one as I am writing this and I still have the reading bug!

Thanks for stopping by, I hope you all stay warm and safe during this storm that is coming up the coast! I have heard mixed things as to how much we are suppose to get here but its looking to be up to 3 feet which SUCKS, but Jason couldn't sleep last night he was so excited! I am headed out to get a few things from the grocery store for the next few days, now that detox is over and just in case the city shuts down and nothing is open (you never know!).

I am going to write a little post recapping last weeks detox, what I thought and how I feel this week so stay tuned for that! I am assuming I will be stuck inside tomorrow so hopefully I will get some different posts written up because I'm sure y'all are sick of the book reviews!!