Time Flies when you're... SUPER BUSY!

Well we are back from our trip; I apologize for not being more in touch like I had planned. We decided against taking the laptop because well, truth be told we really didn’t have room for it! Because we will be moving down to North Carolina and won’t be in Saskatchewan as long as we thought, it made sense to take some of our winter stuff down to North Carolina and leave it at friends of ours to limit the load on the way back! It was hard to part with some of my stuff I’m not going to lie but in the end it made sense, especially considering the fact that Jason may be here packing up on his own to head back depending on how things play out!


We really had a great “vacation” if that’s what you want to call it! Really for the most part we were super busy so the time actually flew by! We have decided that on our next trip, which we have officially booked for July 11th until the 21st, which we will not be taking the same flight as flying that early and having to drive a long distance to get there just didn’t work out!


If you read my blog the night before we left you are aware of the maintenance issue we had the night before leaving (leaking roof), so unfortunately that night I managed to get no sleep at all! I was up, dressed and drinking coffee on the couch at 1:30am waiting for Jason to get up! We left our apartment at 2:00am and although we figured there would be no traffic we didn’t really account for the bad weather we were about to encounter. Our whole drive the wind and rain was HORRIFIC, it added quite a bit of time to our trip that we didn’t exactly account for. By the time we got to the airport we parked the truck in long term parking, checked in and had enough time to grab a quick bite to eat before boarding. Unfortunately for some odd reason I was suffering from some pretty severe heart burn, I swear I have had that stuff maybe 5 times in my whole life… thankfully because that stuff is HORRID!


Our flight was pretty uneventful; it just felt long having had no sleep! We landed in Toronto on time and got our bags before entering the heat wave! Good lord when you haven’t had much heat in awhile when that humidity hits you it’s like a wall! Truthfully at this point I was so tired I felt quite sick and the heat just wasn’t helping my situation! When we arrived I had a nice little nap before getting out and visiting, Jason however couldn’t sleep probably knowing that my brother was home from work and headed over! That night Jason, my dad and brother headed North for a boys weekend while us girls were hanging around the city to indulge in some much needed city life!


Monday morning Jason and I were up and on the road by 5am on our way to Raleigh! We knew it was going to be a long day of driving but it was probably the best trip we’ve ever had down there! We didn’t hit any traffic at all and truth be told the weather was great, naturally as we got more south the humidity was a little more drastic but we couldn’t have asked for better travel! We had little time in the area so we wanted to make the most of it. We went to the home site first and when we arrived to see that they were already breaking ground and flagging the lot was so exciting! 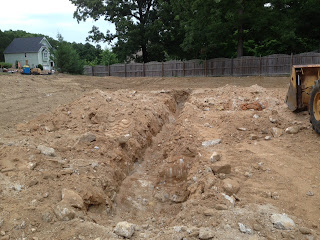 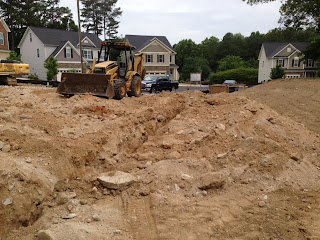 Our time in Raleigh was mostly spent doing things to get ready for the house; we did manage to get in a little American shopping which was great! Good lord how I miss Target! After all our house excitement Tuesday night we headed down to see the Seavey’s and meet miss Amelia for the first time! We had a really great visit before heading back to Raleigh VERY early Thursday morning to meet with the contractor before heading back to Toronto!


Unfortunately our drive back wasn’t so stellar; we encountered rain and fog pretty much the entire drive and all that fabulous expected traffic through Virginia and Washington DC was in full force! Having spent more time with the contractor than expected and the miserable weather we didn’t get back to Toronto until almost 11:00pm!


Friday the guys headed back north and my weekend in the city was less eventful than the last but really nice! Our flight went out Sunday night at 6:50pm so we went a little early with Pearson being such a large airport we didn’t want to risk long lines! We made it back to Regina later than expected and drove back to Estevan! The last two day have been basically getting back in the swing of things, unpacking, cleaning up, and catching up on all the things you miss while away!


I promise now to be back on my blogging game, I know I have a lot to make up for! Keep an eye out for some great new blogs this week though, just because I wasn’t posting doesn’t mean I wasn’t writing!


Hope everyone is having a great week!