I have been absolutely dying to bake in my kitchen and truth be told I have absolutely no good excuse as to why I haven't so far! I suppose the real reason is that I just haven't wanted to eat whatever yummy treats I was thinking of baking! I really enjoy baking, I always have and when we are on a job and Jason can take all the goods to work I make it my mission to bake for all the guys as much as I can and let me tell you they are extremely appreciative! So I figured this weekend the Seavey's are coming up and I have my fingers crossed that the weather will hold off and we will make it to the Santa Claus Parade downtown Raleigh, if that is the case we need to be out the door bright and early and with a bunch of kids its probably a little harder then dealing with my morning self! I decided that I would take advantage of the company and do some baking this afternoon for an easy out the door breakfast Saturday morning.

Now when I show you he pictures I don't want you to get too excited as I did not bake these from scratch! While Jason was away I spent some time touring around World Market (naturally) and their scone mix was on sale! I love scones and have made them from scratch before but thought I would give it a try! So I purchased the Lemon Poppy Seed ones and baked them up this afternoon! 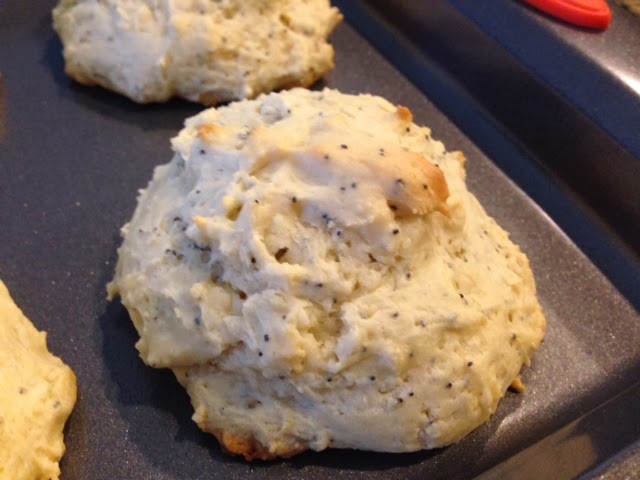 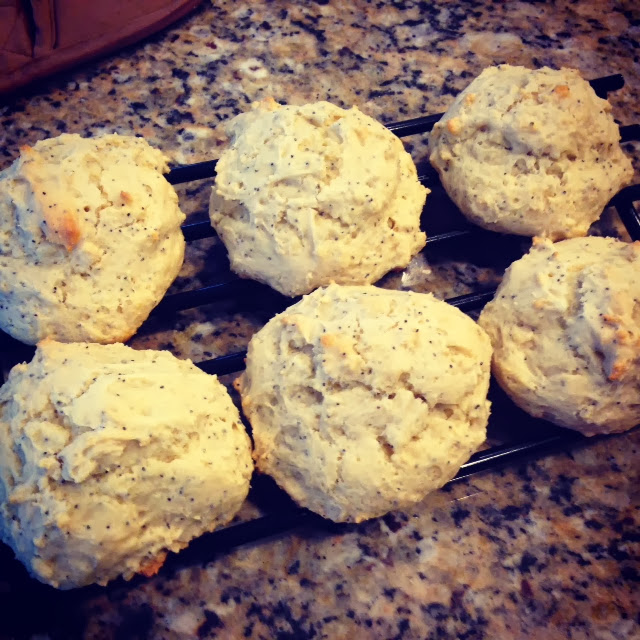 The scones turned out amazing and they were super easy, as any mix generally is! I add water, mixed and baked! Easy peasy! I highly recommend the scone mixes from World Market, they are always running different sales and you can get them really cheap, fabulous for a quick breakfast or a nice afternoon snack with tea!

While in baking mode I figured I would bake up the Pumpkin muffin mix I picked up while Jason was away as well. Generally I will bake from scratch but honestly I don't care for anything pumpkin and I figured it would be a quick thing to whip up for Jason as part of what he loves most about fall is Pumpkin everything! When it comes to baked goods Jason isn't fussy and I will make pumpkin chocolate chip cookies from scratch next week but I figured this would good to have on hand in a pinch and I had never tried anything from Trader Joe's!

I have no complaints, besides the fact that I generally don't like anything pumpkin but the mix was super easy and although I don't like the taste of pumpkin stuff the house smell amazing! 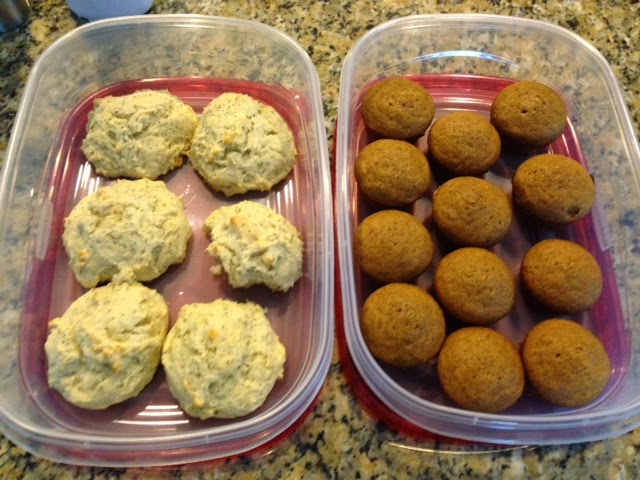 I consider this to be a pretty successful afternoon! We went and got a bunch of running around done, picked up my brothers birthday gift and got that all packed up to send!

We have had absolutely no luck at all with the house people, I rhymed off another email this morning to everyone I had an email for and got nothing back. Jason left an extremely terse message with the superintendents boss this morning who is just as big of a dick as the superintendent, they are both useless as tits on a nun! So of course he said he would figure it out and call back and did not.

About 45 minutes ago someone showed up at the door and said he was here to fix the broken stones on the exterior of the house, he said he was going to take some of it of and have his guy here tomorrow to repair things and he went out there started taking it off and realized there is major issues with the integrity of the front porch and there is no way he can replace the stone until those issues are fixed, so now we have a bunch of missing stone on the outside of the house and Jason is absolutely LIVID! He is on the phone screaming and cursing which is EXTREMELY unlike him but frustration has come to a breaking point now.

So apparently he will be out here tomorrow which is probably bullshit but we will see what happens!

I am off to get some stuff ready for dinner.. did I tell you last night that I baked the best ham of my life??? I really hate bone in ham, its just not my thing! More than that I really am just not much of a meat eater, but last night I made the best ham ever! I ate an enormous amount last night, had a sandwich for lunch and am looking forward to having it for dinner.. which says a lot because I also don't eat left overs! No, I am not fussy at all!

I hope you all had a fabulous Thursday and are gearing up for Thursday night football and if you care Grey's and Scandal!