So I had my blog all figured out, knew for awhile what I was going to write about when I had a chance to sit down and write but now all I can think to write about it what happened tonight on the way to the gym and when we got back! haha!

So on the way to the gym tonight Jason yells "MOOSE!" and swings the truck around.. I see no moose and have no idea what hes talking about, then I look all the way back into the woods and there WAY FAR in the back is a baby girl moose... not a real baby, she was last years baby or possibly the years before baby.. but she still wasn't really that big.. compared to other moose! So off to the gym we go!

So to not confuse two different stories I will get back to the gym story! We went grocery shopping after the gym and when we came home I see the moose laying in front of the apartments across the parking lot, so naturally we drive over there and Jason scares her and she gets up! So we came home and started putting groceries away and all the sudden Jason comes FLYING through the house from the balcony yelling.. "WHERES THE CAMERA, WHERES THE CAMERA?!?!" Haha I figured she might be back! Well not only was she back but she was practically right outside the door! So we went outside and were taking pictures of her and then Jason disappears, he came back with a hand full of carrots and started feeding her!! HYPOCRITE! Remember back a couple of weeks when Bruce was on the stairs at work and Jason said it was a really bad idea to feed him my apple and that he would keep coming back... HA! Check her out.. she was a pretty little thing! 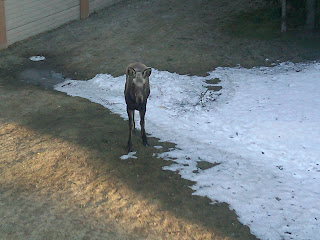 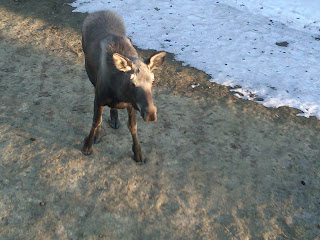 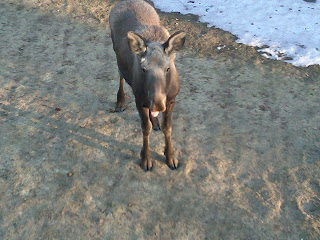 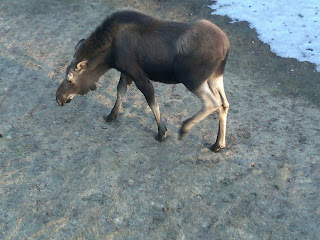 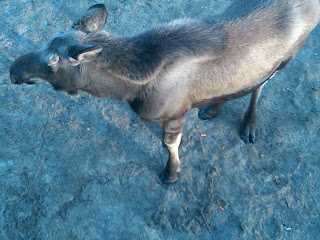 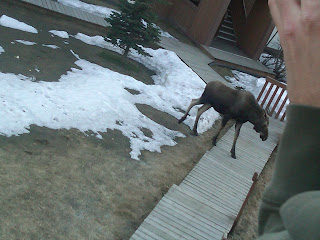 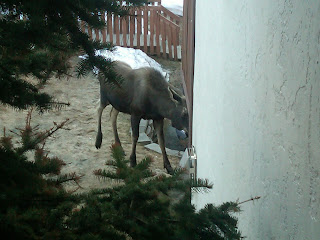 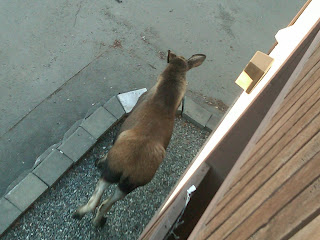 Clearly she had enough and was getting out anyway she good. For their odd shaped body they really do get around pretty well, stairs and everything! 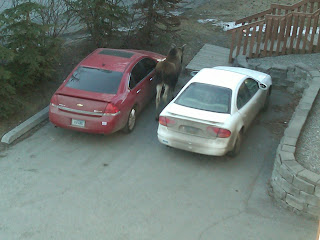 I think she enjoyed the carrots, I have a feeling that we will see her again, and come hell or high water if she is out there again I am going to feed her an apple, I don't care! Shes not having babies and shes by herself, I honestly don't see what the harm could be.

So back to the gym.. I LOVE THE GYM! One Ive been hit on the last couple of times we've been there and whats best about that is that Jason is ALWAYS with me.. haha! But it gets better than that.. WAY BETTER! There is this guy who lives at our apartments and I moved him in about a month ago or so and he is SO fucking weird! Everyone said he was gay although I really didn't think so and usually I'm good about spotting that.. well apparently I wasn't! I could care less about that though.. what I care about is that we run into each other at the gym every night, and he completely avoids me.. and if I worked out the way he did I would probably avoid me too!

This guy (young Sinatra) IS HILARIOUS! First of all he wears gym clothes straight out of a Jane Fonda work out video and looks like a complete tool! Second of all when he has his ipod on and is doing cardio of some sort he closes his eyes and mouth's the songs and basically dances in the most awkward way Ive ever seen.. its the best. I can barely work out because I laugh so damn hard and honestly I cant even help myself!! Ive never seen anything like it!!! There are some characters at the gym of course but this guy is amazing! When he is finished cardio he aimlessly walks around.. in his sweet shorts none the less eyeing the different machines and then he will pick on and just sit there.. not working out.. not even using machine.. just sitting at it.. its epic really.

I had to call him into work today because his disposition from his last apartment saying what he owed after leaving came to our office for some reason so he came in and took it and left like hes never met me in his life.. and before he moved here he use to call me everyday and talk to me on the phone about nothing.. haha. I'm not disheartened by that by any means but I cant help but wonder if he knows I'm laughing at him.. I doubt it!

So really nothing else going on around here, we aren't getting the shitty weather the nor'easter is bringing to the rest of you.. it was pretty decent today actually! I'm SO HAPPY to have a day off tomorrow.. I'm sleeping in, skyping with Miss Caitlin and then going to shop until I drop.. I swear if Starbucks delivered my day would be SET! No such luck though, I will just have to whip something up here.. however I have faith that Starbucks will one day get it together and deliver!

Ive got pretty big hopes for pizza at the Moose's Tooth for dinner this week too.. tomorrow if I'm lucky! Ive been craving it like no other and I REALLY want to have it!

Oh mom.. mention to dad that while Jason and I were at the grocery store tonight he found him and dad "morning cake to have with their coffee" for breakfast.. its called "sock-it-to-me" and he swears its like the coffee cake they love that dad gets at home. I told him that if it was for breakfast than he couldn't have ice cream with it.. it didn't seem to discourage him.. however I'm pretty sure he would try it if we weren't around!

I hope no one is snowed in! HAHA NOT! You assholes are all getting the winter I suffered through this year.. GET YOUR SHOVELS OUT!