Alright so I haven't blogged in awhile.. but in my defense last week was shit and I just couldn't do it!
Ive been trying my best to cope with the worst home sickness I have ever suffered from! All last week I just wanted to sob, I wanted to go home.. I miss everyone so much and talking to everyone made it worse! I couldn't talk about it or I would just cry!! Thursday night Jason and I went out to see the Northern Lights because it was a really good show going on and I just sat in the truck and cried.. haha great company I was!! I don't know why, I don't know why I felt so awful but let me tell you it was AWFUL!!

Honestly I'm sick of the snow, which was going to inevitably happen but I'm really really sick of it! I'm sick of getting up everyday to more and more snow.. I'm sick of not being able to walk anywhere because there is so much so and ice everywhere that you can't move around the snow or you are slipping and sliding on the ice.. Ive had it! Fuck this snow filled bullshit winter.. WE HAVE 12 FEET ENOUGH IS ENOUGH!!! Its obviously not helping that all you assholes at home are going on about your "spring like winter"... BITE ME! Obviously there is nothing I can do about it, but what I wouldn't give for some spring like weather, to not have to bundle up and still freeze every time I go outside! I miss flip flops.. or sock feet without slippers.. I miss real weather and not this bullshit cold!

So Friday night we planned to try the Northern Lights show again, but first we would go and meet all the guys at some bar and grill to play pool.. so Jason said we would have something small there but eat something small here first.. I had a quick sandwich and got ready, I felt exhausted and really didn't want to go but I figured we might as well! When we got to the pool hall it was by no means a grill.. haha apparently it once was but they just haven't changed the sign.. food available.. popcorn! So to make a long story short I only kind of remember leaving the bar.. I kind of remember singing in the back of the truck with Josh and Kris at the top of our lungs, although I have no idea what we were singing. I know I ate at the second bar.. but that's pretty much as far as my recollection goes.. I don't even remember drinking that much, I think its because I hadn't eaten.. whatever I felt better I bet! Until Saturday morning.. FUCK! I had to work and I was SOOOOO HUNG OVER!!! Jason thought it was hilarious because he didn't drink because he was driving.. he said that I was super shit faced and could barely stand.. although I can totally see Jason lying to me about the night to make it more amusing for himself. Saturday sucked! Having said that, Jason being wonderful like he can so often be brought me a wonderful lunch.. please see below my lovely meal of Starbucks Grande non-fat vanilla Chai Tea latte and Fred Meyers Chunky Chicken Tortilla soup!! 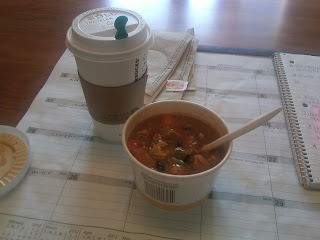 Needless to say we didn't do much on Saturday night, we stayed in and watched the movie The Secretariat with Diane Lane.. excellent movie! Then I went to bed because I was absolutely exhausted and just wanted the day to be over. Sunday we didn't do much.. I continued to cry on Sunday about being home sick.. this time at Walmart.. haha I know, I know.. We had a quiet afternoon at home and then I made a big dinner considering I really never cook anymore!

Monday at work was a joke.. I don't know what is going to happen with this job. Apparently there was an emergency call on Sunday and when Mike got to Creekside to see what was going on Tom was freaking out that I was suppose to be on call, blah blah blah.. well first of all no one has told me I'm suppose to be on call, no one has explained to me what constitutes an "emergency call".. I had absolutely no direction when I was instructed via a sticky note that I was suppose to be on call when they were both away when Tom had surgery! So as far as I'm concerned I'm not suppose to be on call on Sunday's until instructed. WELL.. apparently they see it differently! Apparently they think that I am going to be on call EVERY NIGHT including my day off and Sundays! I have to keep my house phone because I need to be on call and my cell phone is an out of state number so people cant call it apparently and if I want to go out somewhere I then I have to forward my house phone to my cell phone, which I'm not doing because we only have the house phone in the first place because our cell phones work off combined minutes. I absolutely ABSOLUTELY know that I was not told about being on call at night because I would have NEVER agreed to it on account that Jason usually works crazy hours and its not fair for him to have to be getting up in the middle of the night when he doesn't get much sleep anyways. Besides its bad enough that I have to be on call on Sundays!

It gets better if you can believe it... So I was informed on Monday that they will be going away for a month in September.. which is fine with me in regards to working by myself everyday.. GRAND! But I will have to work my days off, and be on call every night and Sundays!! So on top of that.. they wont be paying me for working my days off while they are gone, when they get back they will decide when its convenient for them for me to take an extra day off during the week! NOT HAPPENING! Who are these people? Everything that they don't want questioned is told to me via sticky note when I come in or voicemail when I get in.. like last Friday! I get to work before her all the time, so I make a tea and take off my jacket sit down to listen to the messages and there is only one.. from her.. apparently she no longer works on Fridays!! MUST BE NICE TO GET A 3 DAY WEEKEND EVERY WEEKEND!! Unbelievable!!

Today was my day off, so I got up early so Barb and I could chat FINALLY!!! Although I swear we didn't cover half of what I wanted to talk to.. I need to start making sticky notes and just sending her an envelope full every month! I think I could do that with a lot of people actually!! Then Tammy picked me up and we went and picked up Imelda who is Javier's wife and we headed to Walmart which is always a productive trip and then to a tiny bakery to get Glen a birthday cake because his birthday is on Thursday and I picked up these awesome looking soft flaky reindeer sausage and cheese pastries for Jason for lunch tomorrow!

So then we picked up Mary... her husband Mike works construction on the job, I have met her once before. We went to the mall which didn't go very far and then decided to go to lunch. We went to Humpy's to have fish and chips which I was SO excited about that but unfortunately it did not settle well in my stomach AT ALL! I don't know if it was the grease or what but whatever it tasted AWESOME at the time.. haha Jason thought so too when he ate what I brought home tonight as an after dinner snack!

So that's pretty much it, I'm feeling better about missing home but it still sucks! I think its because I know I cant just go and its hard. The time difference makes it so much harder because I never get to talk to anyone and I feel like I'm so out of the loop on everyones lives.. its so hard! I'm sure I will survive. I'm hoping this week flies by and this weekend we are going to get me some hiking boots and then Jason and I are going to head down to the creek for a nice long walk (weather pending.. you can never make too many plans in advance here) and then next Tuesday is Tammy's last day before she leaves to go home until JULY so we are going for Mani Pedi's which I am so excited for!

I will try and blog again before Saturday and let you know if I still have a job or if I have politely told them to go fuck themselves and my job search has begun!