Alaska, Land of the midnight sun!

Oh what a GREAT weekend! I cant even begin to tell you how WONDERFUL it was to get away with Jason and see and do new things! I know that for a lot of people 20 hours of driving in two days doesn't sound like fun at all, but honestly Jason and I never see each other ever and we never get a chance to do anything, not to mention the fact that I never get any time off. This weekend was MUCH needed and so greatly appreciated!!

Unfortunately on Sunday when we got up it was pouring rain, we didn't let it get us down though we hit Starbucks and then the road! I'm not kidding we were BARELY out of Anchorage and we saw a Mama moose and her babies.. her little little babies! They were sooo cute, I so badly wanted to see little baby moose and there was two of them! Jason said they looked about a week old!! I got one picture but when Jason pulled over they ran into the woods! We drove maybe another 10 minutes, still in the pouring rain and all the sudden I was like "JASON BLACK BEAR!!" There was a freaking black bear on the side of the road, I couldn't even believe it! Of course Jason pulled over and I got a few pictures before it took off, I mean rain of shine this trip was starting off in the best way ever!! Jason and I were pumped!!

Regardless of the fact that it was raining it was honestly a great drive, our next major attraction was the Matanuska Glacier! It was so hard to get good pictures of it because it was such a crappy day but its pretty amazing. Glowing blue snow.. I mean how often do you get to see a glacier? However when we stopped at the look out to take a good look at the glacier there was a bird stuck in the front grill of the truck! I almost cried I couldn't even believe it! Than I caught the plague from the public park washroom. Fuck.

The rain and fog continued, it wasn't the clearest drive but it was still great. We hit dirt roads which I think is unbelievable and if you can imagine we also had no cell service most of the time, which is fine because I didn't care about my phone but I kept thinking if god forbid something happened we would be soooo screwed!! There was literally nothing for millions of miles at a time! If you can imagine it we also hit snow, lots and lots of snow! I'm not talking just a few feet here and there, I'm talking about FROZEN LAKES with tons of snow, I'm talking winter in almost June! I guess when you're at an altitude of 3500 feet that happens, I was in shock!

Speaking of being in shock gas was $4.78 which is absolutely unbelievable! Jason almost had a stroke, believe it or not though the truck averages 18.7 miles a gallon which is pretty awesome so we didn't spend a fortune on gas which is always great! Naturally as you can imagine being in the middle of no where we also had no radio stations, and as you can imagine if you know me at all no radio stations of course means a front seat dance party at which I am of course the DJ! This only lasted so long though before Jason totally took over! Jason recently found a way to download free music for our Ipods and therefore my "recently added" play list is some of the songs Jason downloaded for his Ipod but put on mine! WELL.. it was like reliving my childhood.. Beach Boys all the way! I kept looking over to make sure it was Jason singing along and not dad!! Haha!

We saw quite a bit of wildlife, unfortunately not brown bears, caribou or elk but still lots of wild life! We saw stopped somewhere in the middle of no where because a Mama moose and her baby were on the side of the road. She stood out there and then listened and walked into the middle of the road, she stood in the middle of the road until here baby crossed and then she crossed too, it was so cute!! So Jason pulled over and went to get out and she put her ears back and looked fierce! Jason naturally got back in the truck and left her alone, they are absolutely not to be trusted when they have their off spring and on top of that the moose around Anchorage are a lot more socialized than those anywhere else, therefore a lot more friendly.

There were ton of waterfalls as well, one in particular was restricted access by the military since 1954, obviously that meant nothing to Jason.. he's such a rebel! Illegal activity doesn't scare him at all, haha probably because we hadn't seen another car in at least an hour!

We decided to stop at Birch lake for Jason to do a little fishing, it was starting to clear off and was only sprinkling and as we were driving by there was a bunch of people fishing and catching little fish so we figured why not, it would be a good chance to stop and stretch out legs anyways. It was a really beautiful lake, tons of cabins on there. It reminded me of Gull Lake where Jason and I rented the cottage so many years.. I really miss our time there! Unfortunately Jason didn't catch anything but it was still nice to stop and get out.

Now this next little tid bit about our trip is a big one, I know many of you are going to be extremely envious and I'm not going to lie I cant blame you! Are you sitting down? Jason and I went through THE NORTH POLE! Seriously, look it up! North Pole, Alaska! Right before Fairbanks! I didn't meet Santa because as you can imagine we are well into the year and he is so busy. But the North Pole was pretty awesome, statues of Santa everywhere.. Santa's house which as you will see in the picture is quite amazing, the towns street lights are also all on CANDY CANES! I mean besides the obvious cold, who wouldn't want to live in such a magical place?

Finally we made it to Fairbanks. I'm not going to lie the place was a dive! It is significantly smaller than Anchorage but it was a dive.. There was absolutely nothing there, everyone besides those in the military looked sketchy if not stumbling drunk.. I couldn't believe it. To be honest that is was I feared Anchorage would be like before we arrived. At this point we were starving though so we stopped at the restaurant we had picked out in advance.. haha well wasn't it a surprise! First of all we stood in the door FOREVER because the waitress/hostess/bartender was having a hard time multitasking. We finally sat down and the first thing I noticed was that the menu was not the same as the one we viewed online and neither of the items Jason or I had selected were not on this menu! Apparently their Sunday menu is different from any other day, its more family oriented, she said it not me. So we ordered something else. Honestly this restaurant was the epitome of a small town restaurant in that the owners LITTLE girl was running around the restaurant aimlessly with a baby doll that had no clothes on and her mother was plying her with food to get her to sit down and shut up, I couldn't believe it.

We left the restaurant and drove around town, my opinion definitely didn't change! I was more and more thankful that we are here and not there. After our little venture we headed to the hotel, which was in a super great location, right across from the Fred Meyers and literally right next to the on ramp towards Anchorage. We stayed at a Best Western Plus which was great because it wasn't directly in the city like the other hotel we had debated and I wasn't so worried about the truck being jacked in the night! The hotel was GREAT! The best was SUPER comfy and we were so happy to get in bed after such a long day! It was also great to have the really good black out curtains which were much needed on account that Fairbanks is in the interior of Alaska and therefore they are already at 21 hours of daylight.. let me tell you its something to wake up at 4:15am and it be complete daylight out! Hence, land of the midnight sun!

The next morning when we got up it was so great to see the sun!! We woke up a little late and got ready, had breakfast at the hotel, hit Fred Meyers to get gas and some premade sandwiches for a picnic and were on the road! The interior of Alaska gets a lot more rain, sunlight and heat and therefore is so green, it was great! Its amazing how different areas in Alaska can look, Ive never seen anything like it!

We arrived at Denali only two and a half hours after we left Fairbanks and let me tell you it is absolutely amazing!! If you come to Alaska it is absolutely IMPERATIVE that you see Denali National park! Here is a link to some information, its pretty amazing! The park is over 100 million acres!

At this point in the year you can only drive your own personal vehicle into the park 15 miles rather than the 30 miles you could have last weekend. We we drove in and it was great, we saw a moose cross the road! We got to the 15 mile mark and stopped and had some lunch and did a little hike! It was pretty amazing, we actually got to see Mount McKinley! Mount McKinley is the highest Mountain in North American so therefore most often it is behind the clouds, 90% of people who visit the park don't get to see the mountain!

We did a little hiking which was great, Jason finally saw some Dall sheep which was another thing he could check off his list! They were super far away but he had binoculars so that was great!

Overall we had a really amazing weekend, even the drive back was great! It was so great that it was sunny! Honestly we couldn't have asked for a better day! Everything was perfect!

Jason went back to work today and I'm just getting caught up on things around the house!! I'm going to attach a few pictures I took on my cell phone and then send you all the pictures we took through snapfish. I uploaded them earlier and will send them off right after this!!

Check these out in the meantime though. 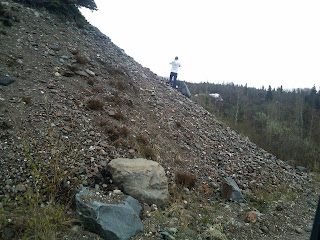 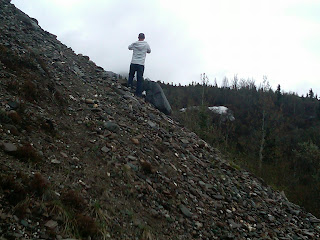 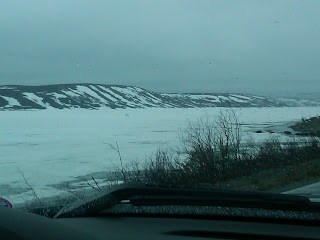 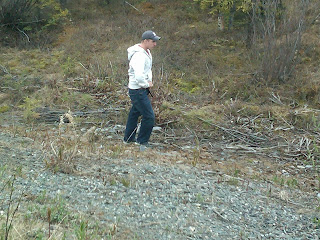 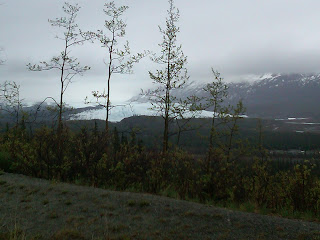 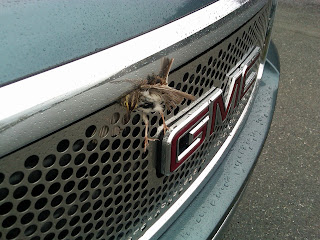 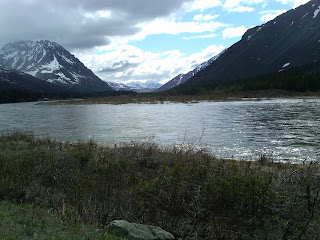 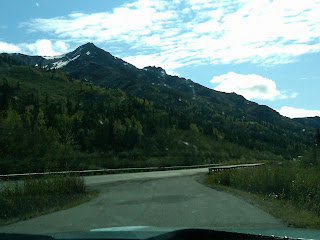 So that is our trip!! I hope you all enjoy the pictures!!

Back to reality tomorrow.. ugh!