Day off? I forgot what that was for a second...

Well hello all.. its been awhile! Don't worry there hasn't been anymore earthquakes!! However Jason is quite sick with a cold and I believe that I am suffering from some pretty bad kidney stone pain! Jason's been sick for quite a few days now and Friday night we were at Fred Myers grocery shopping and I was like.. OH GOD NO.. the pain from kidney stones is pretty distinct! I was having such a good night too!! Jason went out to watch the Celtics game with the guys from work, I came home and ordered Guido's pizza which is my favourite and laid on the couch watching whatever I wanted and vegging.. it was GREAT! So yesterday wasn't such a great day, Jason and I both worked, Jason went fishing after work and I came home and made dinner and then we went on the hunt for Buckley's, which you cant get here! Big surprise! Not to mention I have to get up and pee every 6 fucking seconds but whatever.. I feel better than I did!

That's really about it going on, we both worked all week and didn't really do much else. Went to the gym and stuff. Jason and Josh went fishing last night which was hilarious because Jason came home and said "the guys beside us caught a big fish and we caught nothing, my feet got wet and my line on my new rod is shit!" LOL so Josh writes and says that Jason was using corn as bait and he must have gotten that off "fishingtipsforsuckers.com" I laughed sooo hard! I think I will probably laugh about that all week to be honest.

Nothing exciting going on today, we got up this morning and went to Bed Bath and Beyond in hopes of investing in an eye mask to be able to sleep but I cant find one I like! I had one before, Tasha you remember the one you sent me with Penguins on it? Well I cant find it anywhere and I also cant find one like it, I'm pissed. So then we went to go to the lake so Jason could try his rod again.. its still shit! But we found a couple of garage sales on the way and Jason is all about the garage sales these days, Kristy and Aunt Bren, you would be so proud! After that we went over to Sportsman's Warehouse because whats a Sunday without that store? And now we are home doing nothing!

I'm making Mexican for dinner, homemade burritos, rice and nachos! Burritos with spicy chicken, Mexican rice, cheese, black beans, home made guacamole! SO EXCITED! Jason wouldn't go to one of the millions of Mexican restaurants around here so I'm bringing it to us! I did all the laundry and stuff last night so I can do nothing!

Honestly working 6 days a week is fine but being on call 24/7 sucks! It seems like Ive been getting calls ALL THE TIME about the stupidest shit, the same lady calls every morning.. its ridiculous! I'm so done with it! I am so happy that today I have nothing to do, I can just do whatever I want at my own pace!

Anyways I'm going to crochet for a little while, but I will leave you with some pictures Ive taken over the last couple of days! Hope you enjoy!! 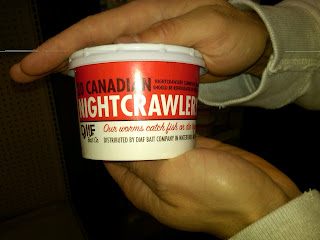 I mean of course they are Canadian, why would you bother fishing with anything else?!?! Haha Jason and I loved this! 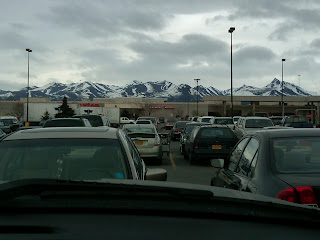 Sitting outside the grocery store waiting for Jason, not a bad view now is it? 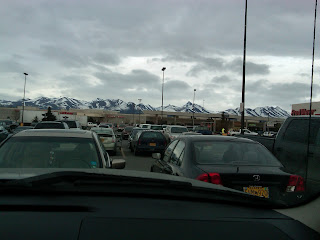 Literally where we are there is a panoramic view of the mountains, its pretty amazing.. crappy days though! Haven't seen the sun in awhile! 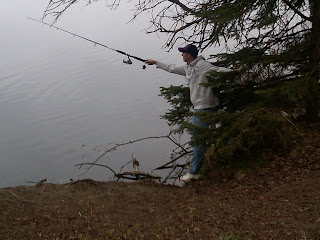 Jason spotted someone had got a weight stuck on this branch and he was trying to get it.. check out how hes holding onto the tree for dear life! haha 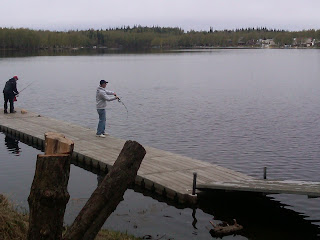 Jason's new rod has the worst line ever, he couldn't cast out more than 6 feet! He's holding out for some Trilene blue, haha tell me where he gets that from?? 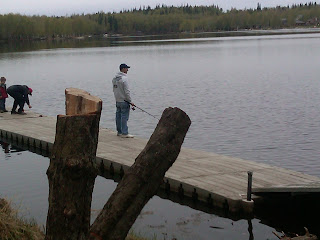 Just handing out.. I was a little ways back.. I didn't fit in at all.. one it was cold and Jason neglected to tell me we would have to hike into the lake, so I wasn't dressed for it at all, haha carrying my orange snake skin purse, at least I had a Starbucks, Jason knows how to keep me happy! :P 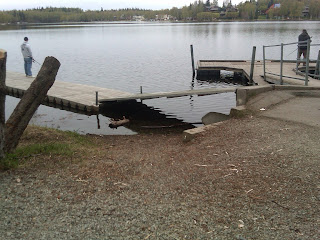 See that thing that you had to walk on to get to the dock.. YA RIGHT! I wasn't going on that thing! 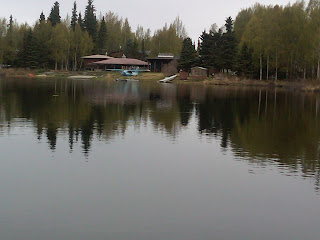 The lake was beautiful, lots of beautiful homes on it! A couple of float planes too! I REALLY want to take a float plane ride so bad! 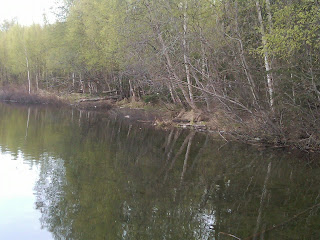 I don't think you can see it but when I took the picture there was a little otter swimming around here! IT was the cutest thing ever! 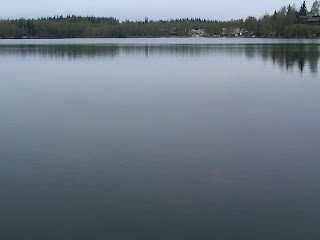 See the lake was beautiful, it was Sand Lake I believe! Makes me miss our summers at the cottage on Gull Lake, we've talked about that a lot lately...oh memories! 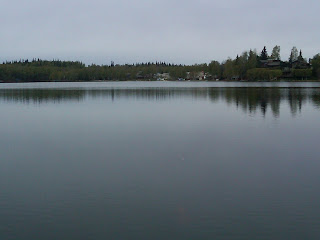 So I hope everyone has a great weekend! I will blog again soon!! Miss you all tons!
Posted by Nicole at 6:13 PM