How is everyone holding up after the Nor'easter yesterday? We got a ton of rain and wind and had a coastal flood advisory that I believe is still in effect but hey it could have been snow and that would have been way worse. Its funny though I really thought living in the North we would have definitely seen snow by now but a few flakes here and there, not enough for me to consider that we have had a real 'first snow'. I will tell you as much as I am relieved Jason is beyond upset about it, he was so looking forward to getting a ton of snow here this year as last year really didn't work out to well for him last year and no dice. Oh well.

Anyways Monday Tanya and I ventured into the city I was on the hunt for a last minute Christmas gift and Tanya really wanted to check out the Union Square Market! I woke up in the morning and wasn't totally excited to go as it was absolutely freezing out but was excited for a change of scenery and the opportunity to say all my Christmas shopping was completely finished. We toured around the city a little and checked out stores that we don't have around here and then hit up the one store I was really looking for that last gift at. Turned out to be a bust and then I didn't know what the hell I was going to do, I had a back up plan of sorts but I was really hoping not to resort to it.. but in the end it worked out.

We totally did freeze while walking around, I swear mid day we started going into stores not because we actually cared to shop at them but more so because we were freezing and looking for any excuse to warm up for a minutes, thankfully New York is full or stores worth warming up in!

We eventually made it to the Union Square Market and let me tell you the Christmas part was fantastic! The market is at East 14th St and Union Square West, you cant miss it.. just look for all the little stands with the candy cane striped roofs!! They had a great mixtures of photos, hand crafted goods, food stations, etc. Surrounding the market was also a farmers market with fresh vegetables, breads, cheeses, etc.

I only purchased something from The Filling Station which was the best decision ever, to be honest I regret not buying more. Have you ever heard of the Oil & Vinegar? They have them all over the US and Canada and they are absolutely AMAZING! We had one in Alaska of all places and I absolutely loved it, this is basically a local Oil & Vinegar where you can buy infused oils and vinegar's and they are absolutely amazing! I purchased the garlic infused oil and Tanya got the Tuscan herb oil, lemongrass and mint white balsamic which all on its own would be absolutely INCREDIBLE on salad and I believe the white truffle salt! Their stuff is just incredible, they have a few locations around the city but will be at the market until Christmas Eve... I might have to go back. 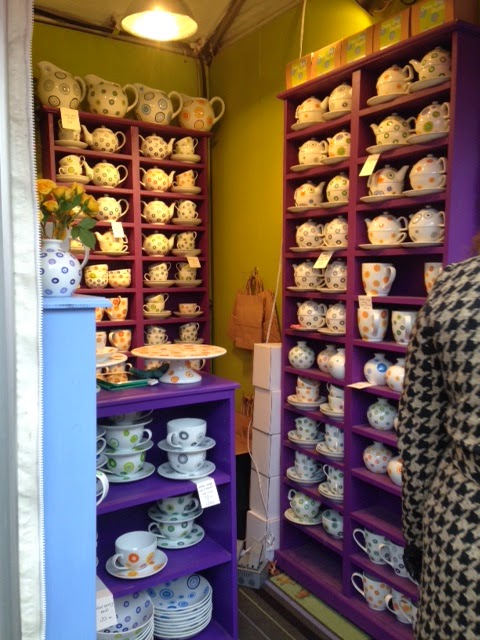 They had a ton of cute little shops! If we weren't absolutely FROZEN to the point of fearing finger loss we may have walked around longer. We are however planning on heading back. 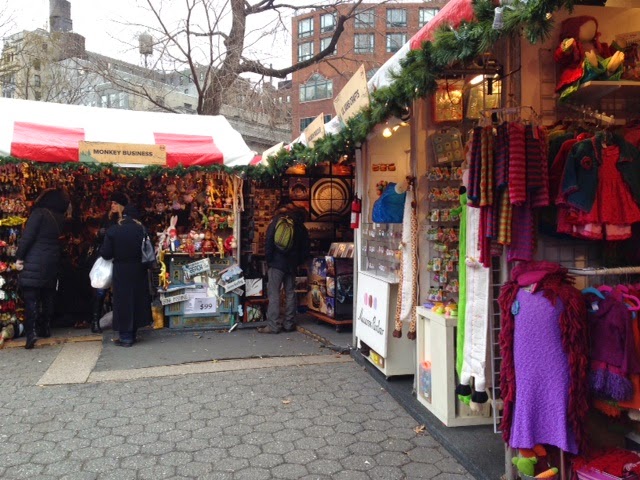 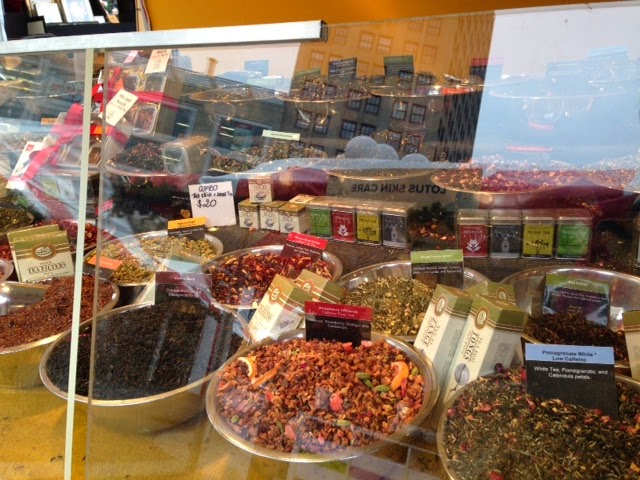 This is Spices & Tease... this places smelled absolutely INCREDIBLE! 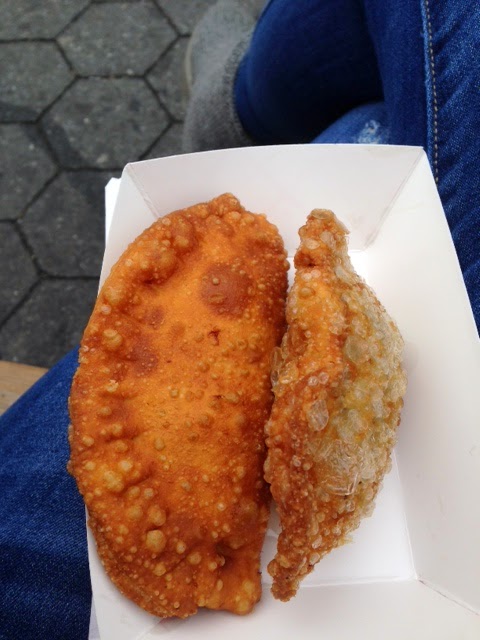 We debated what to have for lunch and ended up deciding on empanadas.. because, obviously! Honestly they were INCREDIBLE.. I wish I would have got a million to go! They were from La Sonrisa Empanadas and they were freshly cooked there and super reasonably priced. I was so excited to eat these bad boys! They have a few locations in the city therefore I'm sure I will run into them again! 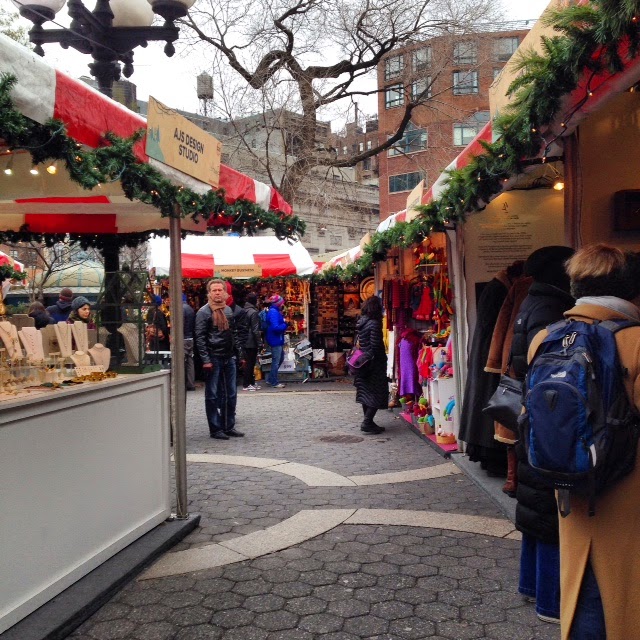 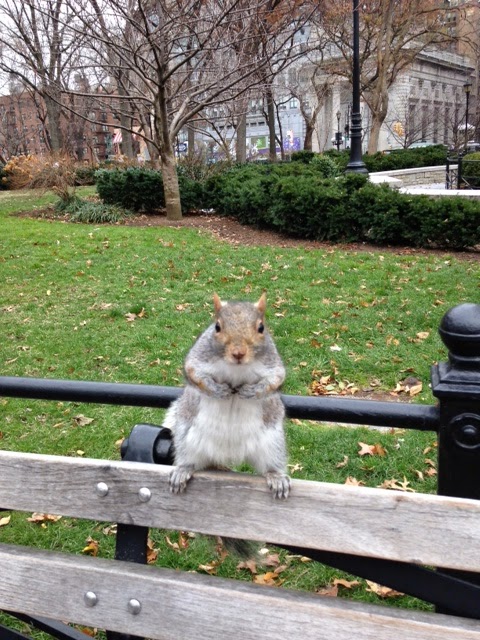 See this guy above? He was quite a brazen little bugger! After getting our empanadas we decided to sit on a bench to eat before planning our next move. WELL. We sat down and were immediately attacked by this guy! I kid you not, if I didn't jump up and proceed to run he would have been on my lap, he nearly was on Tanya's!!!! He's that fat for a reason, clearly people feed him all the time and he didn't see why we should be any different. Well buy your own empanadas fat guy, because I wasn't sharing. He was picky too, a guy a few benches down who was enjoying watching this little jerk harass us tried to give him a piece of his broccoli and he basically scoffed and trotted off! He eventually grabbed a napkin someone had dropped, stuffed the entire thing in his mouth and took off to take it to his nest! Unreal!

After leaving the market we toured back into Soho and went to the Birch Box store and Benefit Cosmetics store, then home! It was a really long day but really great! I was so happy to get home and warm up though, it really was absolutely freezing out!

If you have a chance and are in New York city between now and Christmas Eve I highly recommend checking out the market, its a great place to purchase unique Christmas gifts or New York souvenirs!

As I said yesterday was absolutely miserable and so there is not much to report! I hope everyone is keeping warm and not stuck without power or in their homes because of the bad weather from yesterday!! I suppose it is winter, however you wouldn't know it hear just yet. Again though, I'm not complaining, you can keep the cold because I want no part of it! Bring on a green Christmas baby!!