I thought about posting this on Saturday because I was still shocked that something so outrageous took place and I wanted to tell y'all about it but it didn't happen, so here I am telling you now!!

Remember on Friday's post when I said how much I was dreading going to the post office to mail parcels? Had I known what a cluster screw the day was I probably wouldn't have gone at all.

It started out better than I thought, I managed to get one of the parcels into a large bag which was going to make it easier to get downstairs to meet Tanya, thankfully as I was going out the door someone was going downstairs as well and offered to help me, thank you good Samaritan! I met Tanya in front of the building with all her parcels and she called a taxi. With my arm being useless and all the parcels, the guys are working different hours so they both had the trucks we had no other choice but to take a taxi. The taxi comes and we put all the parcels in the trunk and were on our way!

We get to the post office and the taxi pulls up out front, I got out and told Tanya to tell him the trunk wasn't open.. he said that it was, but I assure you it wasn't. Well.. turns out the trunk wasn't going to open, he tried absolutely everything and there was no way that thing was coming home. I honestly didn't know what the hell we were going to do, the parcels with all the Christmas presents for our families were in the trunk, but he couldn't do anything more than he was doing. I insisted on having a locksmith or something come and he said that we needed to go to the shop where they fix their taxis! I didn't know that it was a good idea to go with him to some undisclosed location but I didn't know what else to do!

Tanya and I decided to go, we text people and let them know what we were doing, when we arrived in the middle of the ghetto to this shop we text people the address so at least people knew where we were. I turned on my GPS on my phone and shared my location.. that may seem dramatic but for all I knew we were going to be sold into white slavery!

I'm not kidding you we stayed there for 2 hours, it was a total nightmare!! We were sitting in the car while they were dealing with electrical stuff trying to get it to open, nothing. Eventually they asked us to get out of the car so they could try and go in through the back seat. They pulled out the back seat and the actual seat and put a hole in the back seat to see if they could somehow get it open that way. Let me just say a Lincoln Continental is quite well built.. at least on the inside. There was just no luck!

By this time we were FREEZING cold, standing on cold damp cement for hours in the middle of an auto shop that had the doors open and it was freezing outside, just miserable. We were beyond pissed that our whole day was a bust and at this point we still didn't know what the hell was going to happen. However by now we felt perfectly safe as everyone (they were all named Cesar, I kid you not.. that or they shared shirts) were super nice and friendly, they offered us something to drink and when they realized the back seat wasn't the answer they tried to put it all back together so we could sit in the car and at least be warm.

They decided to try a pry bar, which let me tell you was going to take the bumper off before it opened the damn trunk! In the end they had no choice but to cut a hole in the trunk with a saw and try and open it that way. They called the owner of the cab company because at this point they were going to have to replace the trunk, but they really had no other choice! 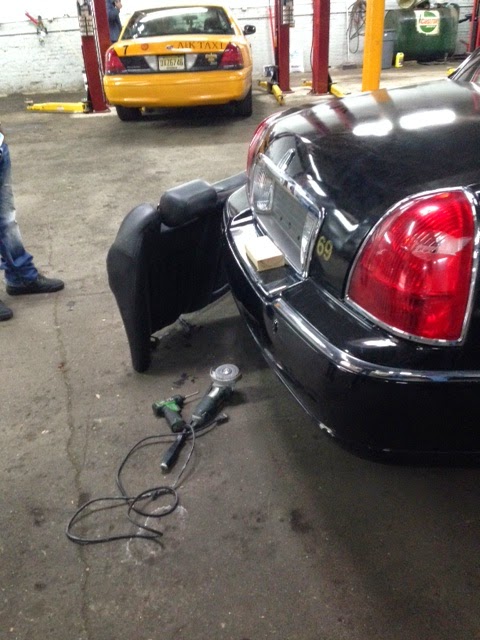 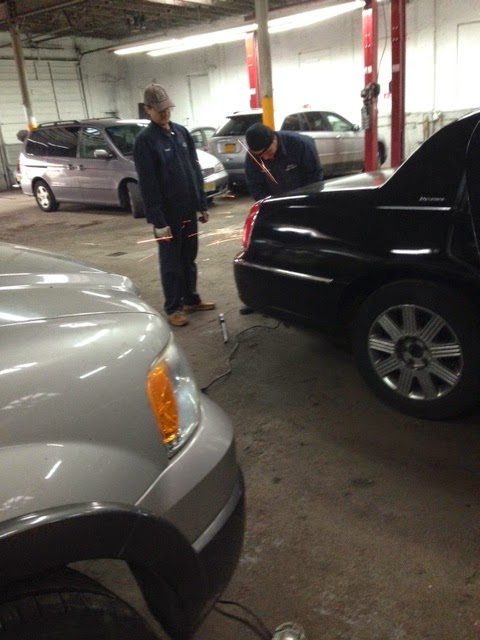 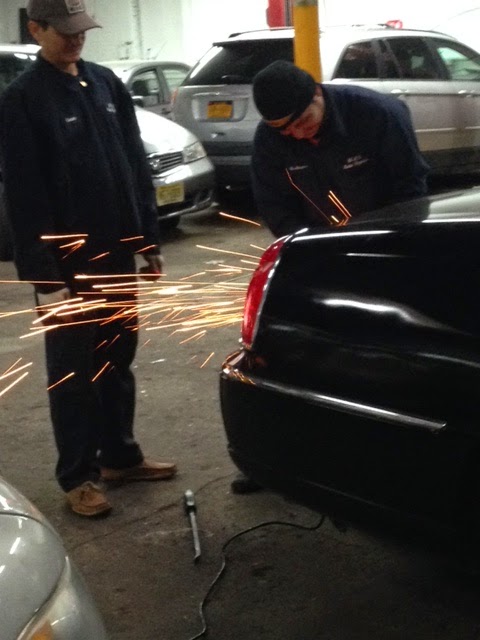 At this point I pretty much thought they were going to light the presents on fire! 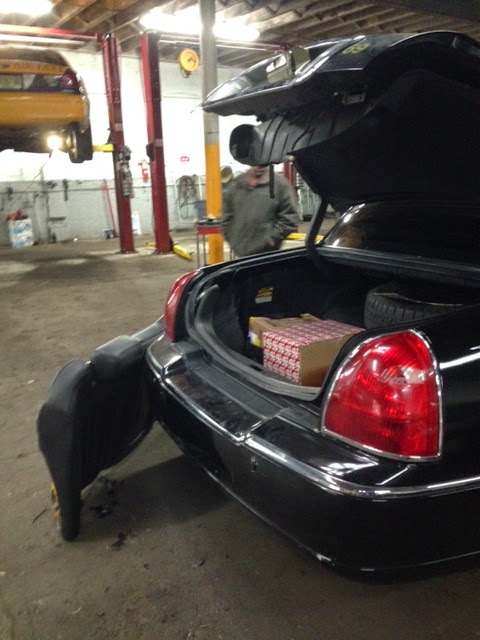 SUCCESS!!! Yes that is the back seat leaning against the bumper!

At this point we were really happy to see our parcels but we just wanted to get the hell out of there. Honestly I felt really bad for the cab driver as well, I mean he basically lost out on a whole days work and he had to stand around there as well waiting and watching them rip apart this car. At first the way he was acting I thought it was his personal car but he explained it wasn't however he was attached as he has been driving that same car for 5 years.

None the less the owner finally showed up, they put our parcels in his car and they took us to the post office. UNREAL!

By the time we got to the post office the lineup was absolutely RIDICULOUS!! We stood in line forever and when we finally got up to the front the woman working was the biggest bitch ever! She said it was because she was hungry and hadn't eaten all day when I called her on it, so I made sure to tell her exactly how my day had gone and the least of my aggravation was my grumbling stomach.. she changed her tune a little bit after that!

After the post office we decided to grab coffee at a place right because the post office and it was CRAP! Not only was it crap but it was cold... not exactly what we were looking for! We froze our asses off on the walk home and honestly at this point I just wanted a drink or something! I mean I seriously couldn't make this up if I tried, who does this happen to??? I guess it could have been worse, we could have been on our way to the airport or something to catch a flight and our luggage was stuck or something! Can you imagine?

It definitely was not the Friday I was looking forward to, and it was way worse than the cluster screw at the post office I was dreading to begin with! I still cannot believe it, I had to take pictures because I don't think anyone would have believed us!

So that was my Friday! How was yours???